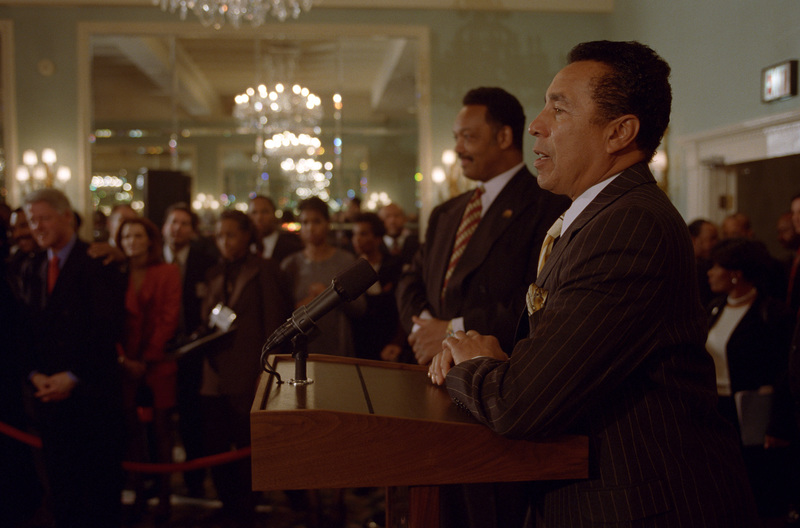 One of the originators of the Motown sound, William “Smokey” Robinson, Jr. celebrates his birthday on February 19th. Founder and front man for the vocal group the Miracles, he was associated with them from their origins as the Five Chimes in 1955 until 1972. Robinson left to become involved in the business side of the music industry as vice president of Motown. Since 1973 he has turned out records and performed, off and on, as a solo artist. His most recent album, Christmas Everyday, released through Amazon, came out on November 10, 2017.

In 2012 Robinson told the Los Angeles Sentinel how he got the nickname “Smokey.” According to Robinson, Uncle Claude, his favorite uncle and godfather, gave him the moniker. The two were very close and spent a great deal of time together. As a kid, Robinson loved cowboy movies; so that is where they often would go. Uncle Claude took to calling the boy “Smokey Joe,” clearly a cowboy name. The singer finishes the story in the following manner:

So from the time I was three years old if people asked me what my name was I didn’t tell them my name was William, I told them my name was Smokey Joe. That’s what everyone called me until I was about 12 and then I dropped the Joe part.

Robinson was born in 1940 in the North End area of Detroit. His family was poor and scraped to get by. In high school he got good grades and distinguished himself in various sports. But Robinson’s main area of interest proved to be music. He formed the first lineup of the Five Chimes in 1955; they changed their name to the Matadors, and then finally to the Miracles in 1958. Around this time, Robinson’s group began performing in Detroit venues.

Robinson started collaborating with songwriter Barry Gordy in 1957. This duo met with tremendous success within just a few years. The Miracles were one of the first groups to sign with the hit machine that came to be known as Motown Records. They released their first hit single “Shop Around” in late 1960. It shot up the charts like a bullet, becoming Motown’s first million-selling record.

The list of hits turned out by Robinson and the Miracles is stunning and stands as one of the great achievements in the history of soul music. Between 1960 and 1970 Robinson, serving as lead singer, chief songwriter, and producer for the Miracles, put out 26 top forty singles. Included in this impressive array of gems were “You’ve Really Got a Hold on Me,” “Mickey’s Monkey,” “I Second That Emotion,” “Baby, Baby Don’t Cry,” “The Tracks of My Tears,” “Going to a Go-Go,” and “More Love.” In December 1970 “The Tears of a Clown” (a re-release originally recorded in 1967) became the group’s only number-one hit.

Robinson wrote songs not only for the Miracles, but for other artists as well. Between 1962 and 1966 he was one of the major songwriters for Motown. For Mary Wells, he penned the hit singles “Two Lovers,” “My Guy,” and “You Beat Me to the Punch.” The Temptations turned “My Girl,” “Since I Lost My Baby, and “Get Ready” into big time chartbusters. Marvin Gaye benefited immensely from Robinson’s masterpieces “I’ll Be Gone” and “Ain’t That Peculiar.”

As a solo artist, Robinson met both with great success and dismal failure. After a couple of misfires in the early 1970s, he released the album A Quiet Storm in 1975. Three hit singles emerged from the record: “The Agony and The Ecstasy,” “Quiet Storm,” and “Baby That’s Backatcha,” which peaked at number-one on the R&B charts. Robinson’s next four LP’s, Smokey’s Family Robinson, Deep in My Soul, Love Breeze, and Smokin, sold poorly, largely due to inadequate promotion and negative reviews from critics. In 1979 he earned his first solo top ten Pop single with “Cruisin.’” Two years later Robinson charted with the ballad “Being with You.” It went to number two on the Billboard Hot 100 and became his most successful single as a solo performer to date. Making something of a comeback in 1987 after a lengthy period of personal and professional issues, Robinson released the album One Heartbeat. It spawned the hit singles “Just to See Her” and “One Heartbeat,” both of which peaked in the top ten on Billboard’s Pop, Soul, and Adult Contemporary charts.

Continuing this up and down cycle into the 1990s and beyond, Robinson left Motown pretty much for good in 1990 (he would return to the label for a few years in 1999). His initial record after the break-up, Double Good Everything did next to nothing. Time Flies When You’re Having Fun, coming out on Robinson’s own label in 2009, reached number 59 on the Billboard album chart. The showing was his best since One Heartbeat. Released in 2014, Smokey and Friends, a LP of duets (including songs with Elton John, Linda Ronstadt, and James Taylor), went to number 12 on the Billboard album chart.

The numerous honors and awards received by Robinson attest to his prominence and influence as the head man with the Miracles and as a solo artist. He was inducted into the Rock and Roll Hall of Fame in 1987—controversially just himself and none of the other Miracles. It wasn’t until 2012, 25 years later, that all of the original members of the group—Marv Tarplin, Bobby Rogers, Pete Moore, Ronnie White, and Claudette Robinson—received their just due and joined their leader in the Rock Hall. Additional noteworthy accolades handed out to Robinson include induction into the Songwriter’s Hall of Fame (1989), National Medal of Arts honoree (1993), Kennedy Center honoree (2006), honorary doctorate degree from the renowned Berklee College of Music (2009), Library of Congress’ Gershwin Prize for Popular Song, and induction into the Rhythm & Blues Hall of Fame (both 2016).

The documents from our collection focus on correspondence involving President Clinton and Smokey Robinson. 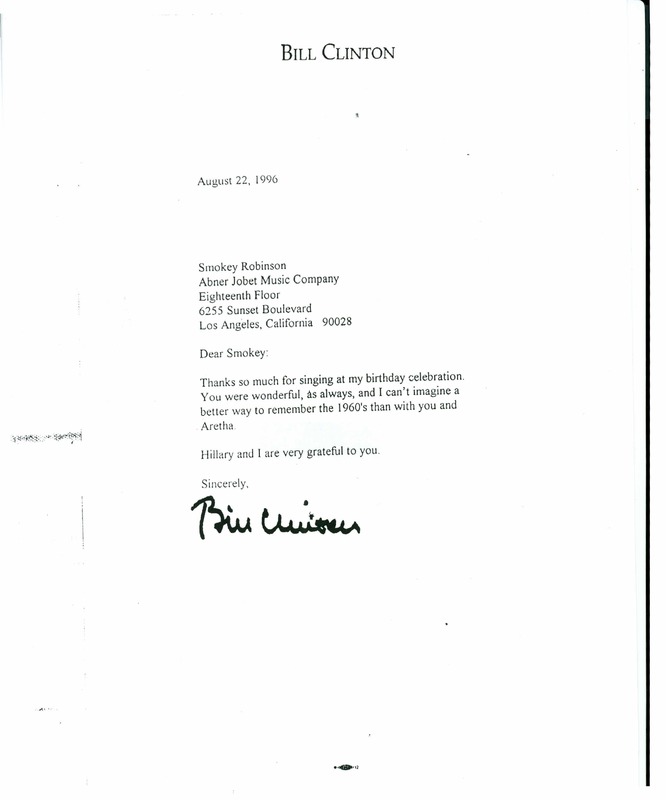 In the first letter, dated August 22, 1996, the Chief Executive is effusive in praising the singer’s performance at his 50th birthday celebration.  He concludes by saying “I can’t imagine a better way to remember the 1960s than with you and Aretha.” 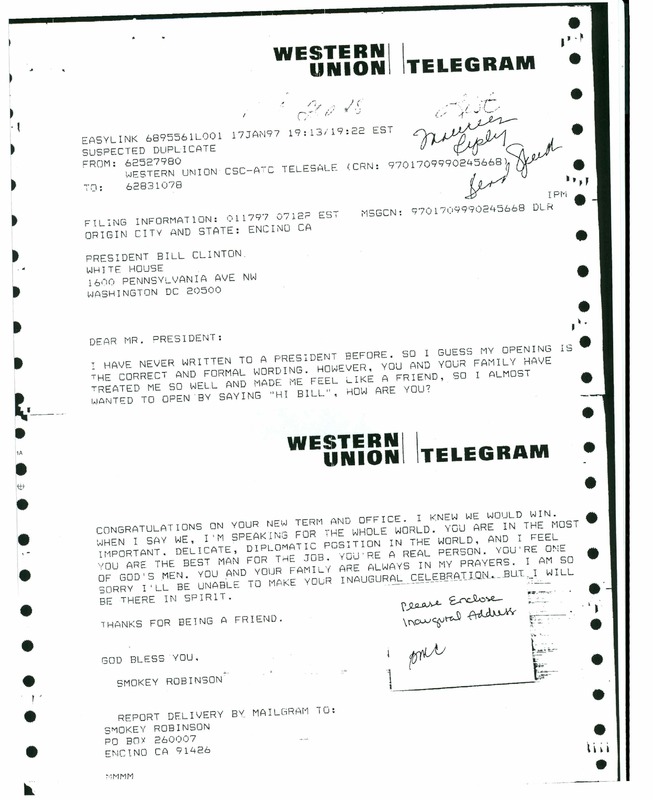 The second case begins with a telegram from Robinson to Clinton days before the President’s Second Inauguration.  Robinson ends by declaring that he will be unable to attend the festivities.  The remainder of the telegram is filled with seemingly unending adulation of Clinton.  Robinson sees him as occupying “the most important, delicate diplomatic position in the world, and I feel you are the best man for the job. . .”

The photos from our collection highlight a Keep Hope Alive Reception, held at the Hotel Washington in Washington, D.C. on December 7, 1999.  President Clinton and Motown legend Smokey Robinson addressed the 100 people who attended the fundraising event.  Clinton spoke at length about his relationship with Jesse Jackson and the many contributions his organization Rainbow/PUSH (Pledge United to Save Humanity) Coalition has made to the betterment of society.  Robinson talked briefly about the importance of keeping the arts (including music) in our school system.  “Keep Hope Alive” is the name given to an inspirational speech delivered by   Jackson at the DNC (Democratic National Convention) on July 19, 1988.  Clinton, Robinson, and Jackson are shown in the two photographs. 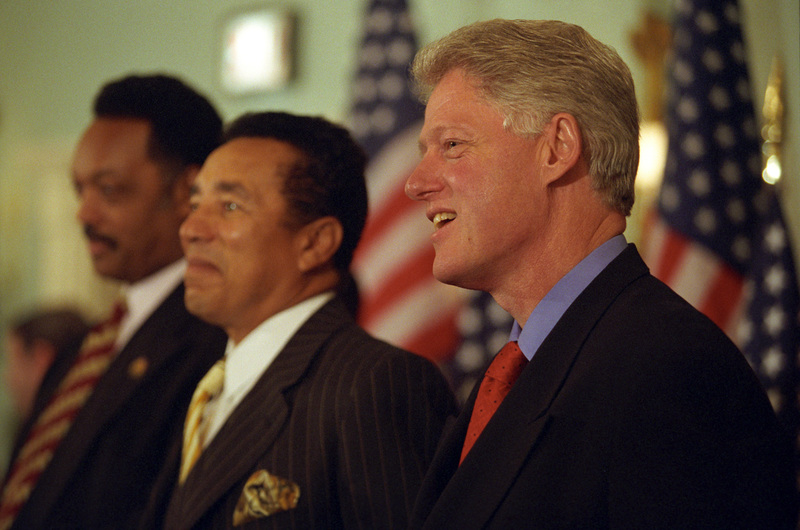