"It's impossible to be in this job without feeling a special bond with the people who have gone before — the other 41 members of one of the world's exclusive fraternities." - President Clinton

When President Clinton took office, there were five living former presidents. In his first year in this “exclusive fraternity,” President Clinton met all of its members and would soon call on many of them to publicly support the historic North American Free Trade Agreement (NAFTA). During his administration, President Clinton received foreign policy advice from President Nixon, shared similar views on trade with President Ford, and called on President Carter to help peacefully resolve tensions in North Korea and Haiti. After President Clinton left office, he would go on to form a friendship with President George H.W. Bush that Clinton would call “one of the great gifts of his life.”

At the opening of President Clinton’s Presidential Library on November 18, 2004, President George H.W. Bush stated that “It has to be said that Bill Clinton was one of the most gifted American political figures in modern times. Believe me, I learned the hard way.” The two former political rivals gravitated towards each other on that day as President Clinton provided all of the former presidents with a tour of the new facility. In December 2004, President George W. Bush sent President Clinton and President H.W. Bush to Sri Lanka to assist with tsunami recovery efforts.  This humanitarian partnership continued in 2006, when they were sent to assist with the recovery from Hurricane Katrina. During their relief tours together, these members of the exclusive “Presidents Club” realized how much they enjoyed each other’s company. Their relationship extended beyond shared humanitarian efforts. President Bush famously made a surprise visit to President Clinton’s Harlem offices while President Clinton was away on business. Likewise, in 2005, the 41st President and 42nd President spent a weekend filled with boat rides, golfing, and fishing at President Bush’s Kennebunkport compound. This special friendship may have grown deeper and more meaningful after President Clinton left office, but it likely began with a humble note of encouragement and support that President Bush left in the top drawer of the new president’s desk. In his note on January 20, 1993, President Bush wrote:

"You will be our President when you read this note. I wish you well. I wish your family well. Your success now is our country’s success. I am rooting hard for you.”

When Governor Clinton was running for the presidency, news media and voters made obvious comparisons between him and another Democratic southern governor-turned-president. Clinton wanted to distinguish himself from President Carter on the campaign trail, however, and said that “Jimmy Carter and I are as different as daylight and dark.” But like President Clinton, President Jimmy Carter established a reputation in his post-presidency as a humanitarian, interested in peacefully resolving international conflicts. In 1994, President Carter offered to de-escalate tensions with North Korean President Kim Il Sung over the country’s move to militarize plutonium fuel rods. The use of President Carter to resolve this conflict proved complicated, when he announced an unofficial agreement with North Korea to bring an end to the stalemate on CNN before allowing the Clinton Administration officials to review the agreement.  Despite this, President Carter’s mission successfully brought an end to the fuel rod crisis, and President Clinton called on the former president later that year to be a part of a diplomatic team to avoid an armed conflict with the military leaders of Haiti. President Clinton dispatched a last-minute diplomatic team of former President Jimmy Carter, former Chairman of the Joint Chiefs of Staff General Colin Powell and Senator Sam Nunn (D-GA) to convince General Raoul Cedras to step down. The team was successful, and Cedres ultimately agreed to leave the country after Carter explained that there was no other option to avoid a U.S. invasion. After years of public service in his post-presidency, President Clinton presented Jimmy Carter and former First Lady Rosalynn Carter with the Presidential Medal of Freedom on August 9, 1999, at the Carter Center. Clinton said this about Carter's post-presidential career:

[it is] "truly unprecedented in American history, but to call him the 'greatest former president' does not do justice to him or his work. Jimmy Carter's work as president broke new ground and is still shaping events today." 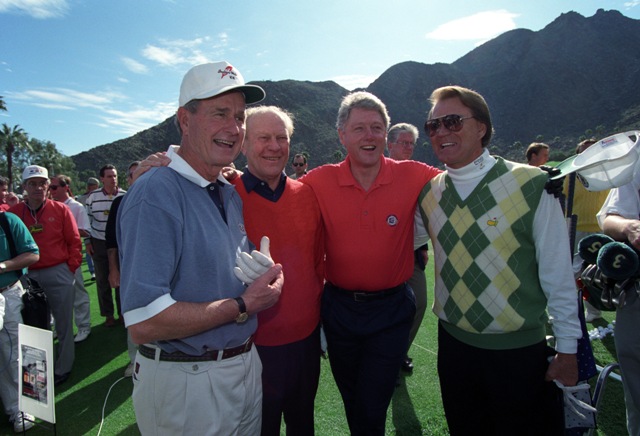 "Steady, trustworthy, Gerald Ford ended a long national nightmare... When he left the White House after 895 days, America was stronger, calmer and more self-confident. America was, in other words, more like President Ford himself."

Gerald Ford was not the only former president that supported NAFTA. The George H. W. Bush administration originally negotiated NAFTA, and the agreement garnered bipartisan support from the "presidents club." In a 1993 White House ceremony outlining the importance of NAFTA held weeks before Congress voted on the agreement, former President Carter said “not a single lobbyist against NAFTA has been able to dig up one former president that was against this agreement.” Carter was also a proponent of the agreement and said that voting on NAFTA was essential to protecting future markets in two of the major international economies. After Congress passed NAFTA, the White House held a NAFTA kick-off event on September 14, 1993, which was attended by former Presidents Ford, Carter, and Bush. The former Presidents celebrated the achievement with President Clinton and looked on as he signed the historic trade agreement.

In 1992, President Nixon reached out to Democratic presidential nominee Clinton on the campaign trail. President Nixon emphatically believed that in order for the newly-formed Russian government to succeed, they needed an increase in foreign aid. President Nixon had become the first American President to visit Moscow for a summit with the Soviet leader Leonid Brezhnev in 1972. After his presidency, Nixon returned to the Soviet Union in 1986 and 1991, as well as after the fall of communism in 1992 and 1993. President Nixon was the foremost advocate for U.S. leadership in the wake of Russia’s transition to a free market economy. After President Nixon returned from Russia in 1993, he received a telephone call from President Clinton. Clinton called to discuss Nixon’s opinion of Boris Yeltsin, but during the call, the new president also asked questions about the role of the president and work-flow to one of the “presidents club’s” most senior members. President Clinton followed his telephone call with an invitation for the two presidents to meet in the White House to further discuss a strategy to make more financial aid available for Russia. President Nixon continued to serve as an invaluable de facto foreign policy advisor concerning the former Soviet Union for President Clinton until his death in 1994.

The following table contains a searchable list of the meetings and telephone calls between President Clinton and the former presidents.