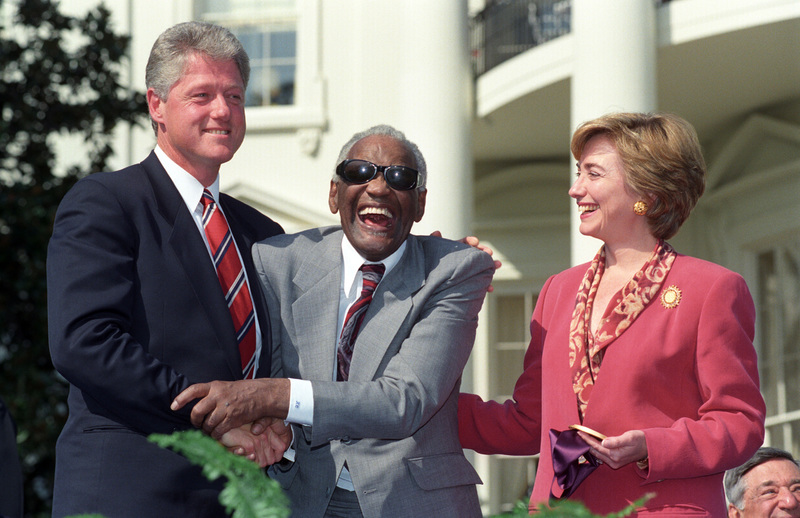 Born in Albany, Georgia, Charles experienced a poverty-stricken childhood and didn’t become a truly successful recording artist until the late 1950s. He started losing his sight at the age of four due to glaucoma. Permanent blindness rapidly set in; by the age of seven Charles, receiving strong guidance from a destitute but resourceful mother, succeeded in getting enrolled at the Florida School for the Deaf and Blind in St. Augustine. He stayed there until 1945 and, in the process, learned how to live on his own and acquire a degree of independence. At the school the musical talent of Charles soon became obvious. His teacher taught him how to play classical piano music. Not satisfied with just that, the precocious youngster performed popular songs of every genre (blues, jazz, country) he heard on the radio at school assemblies.

Charles embarked on a career in music in the mid-1940s. He went through tough times in the beginning and basically endured borderline poverty for many years. The aspiring musician moved around constantly, living in Tampa, Seattle, and Los Angeles. In Seattle he met and struck up a friendship with a 15-year-old Quincy Jones. His big break came in 1952 when Ahmet Ertegun signed him to Atlantic Records.

In short order Charles, under the tutelage of up and coming record producer Jerry Wexler, began showing off the songwriting skills that would be one of the ingredients to his breakthrough into the popular music charts. Beginning in 1954 with “I Got a Woman,” including “I’ll Drown in My Own Tears” and “Hallelujah, I Love Her So," and ending with the vibrant and explosive “What’d I Say” in 1959, he strung together a series of hits that established himself as a force to be reckoned with in the R&B charts. These songs featured the distinctive vocal style of Charles mixing elements of gospel, jazz, and blues.

According to Charles, “What’d I Say” came about when in December 1958 he needed to fill time at the end of a concert. The performer told the Raelettes, his female back-up singers, “Listen, I’m going to fool around and y’all just follow me.” What ensued represented the apogee of Charles’ success at Atlantic. The song culminated with a call and response between him, the Raelettes, and the horn section of the accompanying orchestra. Charles and the girls shouted and clapped joyously, punctuated by piercing blasts from the horns. The risqué nature of “What’d I Say” helped catapult it into the upper reaches of the charts. But some radio stations took offense and banned the song. No matter! Charles’ composition peaked at number 1 on Billboard’s R&B singles chart and at number 6 on Billboard’s Hot 100. Also, “What’d I Say” became the first gold record for the 28-year-old rising star.

Changing labels in 1959, Charles moved to ABC-Paramount Records because of the more liberal contract offer he received from executives who wanted to broaden their appeal by adding young black artists headed for stardom. The new deal Charles got at ABC gave him a lot of money ($50,000) for the time, provided for an annual advance and higher royalties, and outlined the steps whereby he could eventually secure ownership of his master tapes. Switching focus, the superstar in the making opted to become an interpreter of songs instead of a composer of original material. He reaped immediate dividends from the decision when at the start of the 1960s Charles earned four Grammy Awards (his first), including two for “Georgia on My Mind,” which was written in 1930 by Hoagy Carmichael and Stuart Gorrell. Over the years the song has been a mainstay for Charles, winding up as undoubtedly his signature tune. The follow-up to that song, “Hit the Road Jack,” written by R&B artist Percy Mayfield, became another monster hit for Charles and won him yet one more Grammy.

Perhaps the clearest example of Charles establishing himself as an artist covering the work of others occurred in 1962 when he ventured into country music. In that year he released Modern Sounds in Country and Western Music and its sequel, Modern Sounds in Country and Western Music, Vol. 2. This represented a radical departure for Charles as he ventured into a field quite different from his normal endeavors of rhythm and blues and occasionally even jazz. Several hit singles came from the albums, with Charles’ version of Don Gibson’s song “I Can’t Stop Loving You” topping the pop charts for five weeks and remaining at the top spot in the R&B charts for ten weeks.

Throughout the remainder of his career Charles continued to make albums that garnered excellent reviews, toured extensively in support of these records, duetted with many of the top stars of the day, and just generally stayed in the limelight through a combination of appearing in movies, making commercials, and other creative ventures. In 1993 the LP My World, with his version of Leon Russell’s “My Song,” reached the Billboard 200. It marked the first time in many years that any work by Charles attained such a degree of commercial success. Charles’ popularity increased (especially among the younger generation) as the result of appearing in the hit film “Blues Brothers” (1980) and participating (with other musicians) in the charity project USA for Africa (1985) that yielded “We Are the World.” A series of Diet Pepsi television commercials that came out in the early 1990s and featured the jingle, “You Got the Right One, Baby,” helped keep the Charles name front and center for quite a while. He seemingly sang duets with an endless array of artists. Probably the two most notable pairings were with Willie Nelson for “Seven Spanish Angels” (on the 1984 album Half Nelson) and with Van Morrison for “Crazy Love” (on the 2007 album The Best of Van Morrison Volume 3).

Charles stayed out on the road until well past his 70th birthday. His final shows occurred in the summer of 2003; he cancelled around 15 tour dates in that year due to “acute hip discomfort.” This action stood out because of its uniqueness. According to a press release put out by Charles’ management, the scrapping of these scheduled performances was the “first tour ever pulled in the entertainer’s 53 years of concert giving.”

Although Charles underwent successful hip replacement surgery (and was planning to go back out on tour), he never performed live again because of severe health problems that began cropping up in the aftermath of the operation. On June 10, 2004, at the age of 73, Charles succumbed to complications from liver disease. A few days later his funeral took place; he was buried at Inglewood Park Cemetery in Los Angeles. Willie Nelson, Glen Campbell, Stevie Wonder, and B.B. King gave stirring tributes; Bill Clinton’s thoughtful remarks came in the form of a video made specifically for the occasion.

Clinton considered Charles to be an extraordinary and transcendent performer who possessed a voice of unusual brilliance and grace. He saw him in concert many times beginning with his years as a student at Georgetown. On June 24, 1967, Clinton’s junior year at Georgetown, he saw Charles perform at Constitution Hall in Washington, D.C. In his autobiography, My Life, Clinton says he and his date

". . . sat near the back of the balcony and were among the tiny minority of white people there. I had loved Ray Charles since I heard his great line from ‘What’d I Say’: ‘Tell your mama, tell your pa, I’m gonna send you back to Arkansas.’ By the end of the concert Ray had the audience dancing in the aisles. When I got back to Potomac Avenue [his home] that night, I was so excited I couldn’t sleep. At 5 a.m., I gave up and went for a three-mile run. I carried the ticket stub from that concert in my wallet for a decade." 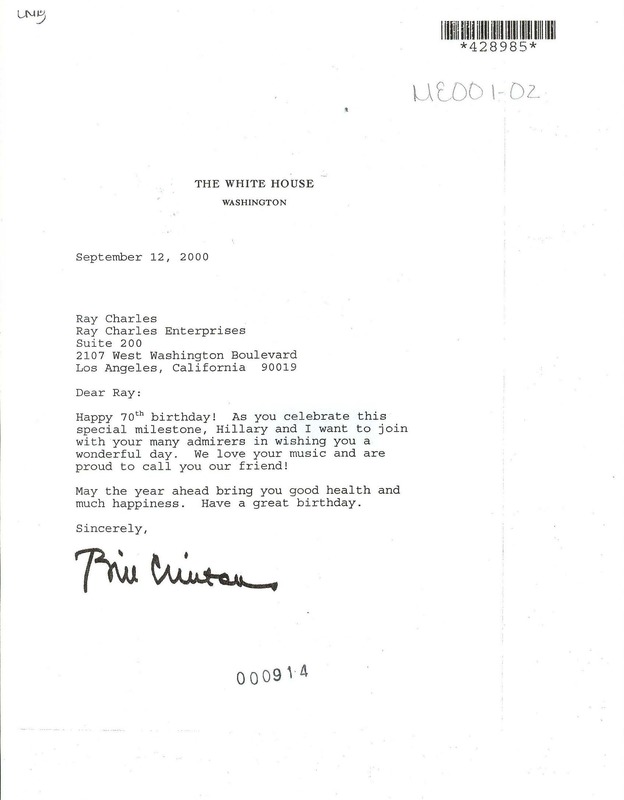 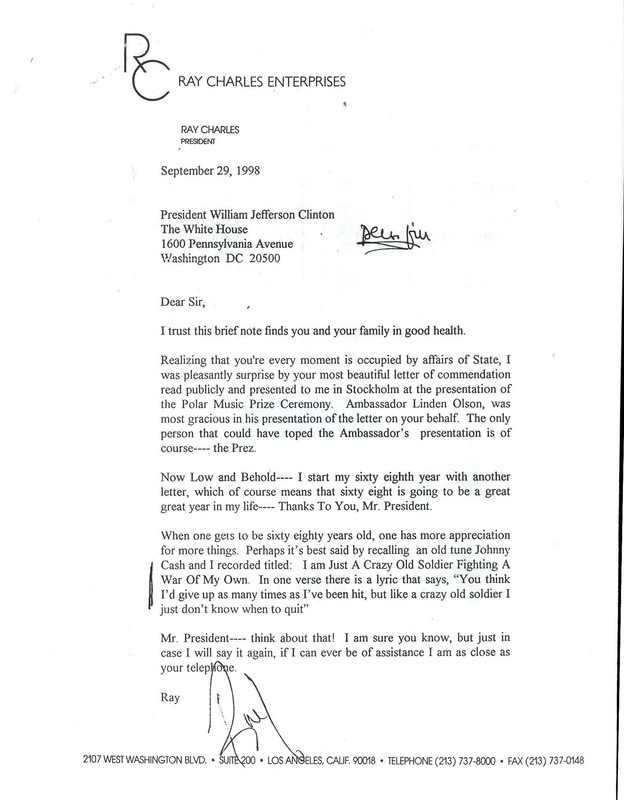 Documents from our collection show Charles to have been a friend of Bill and Hillary Clinton. In the first instance, the President congratulates Charles on the occasion of his 70th birthday. “We [Hillary and I] love your music and are proud to call you our friend!” The next case concerns an exchange of letters between Charles and Clinton that starts out with the singer expressing his appreciation for the President’s commendation that was read out publicly during the presentation of the prestigious Polar Music Prize in Stockholm. Charles, 68 at the time, says when you get to be that old, one becomes more thankful for what might appear, at first glance, inconsequential things. He goes on to refer to a song by Johnny Cash (recorded by him) entitled “I am Just A Crazy Old Soldier Fighting A War Of My Own.” According to Charles, “In one verse there is a lyric that says, ‘You think I’d give up as many times as I’ve been hit, but like a crazy old soldier I just don’t know when to quit.’” Clinton responds with, “I loved your letter. I am like your crazy old soldier, not about to quit.” 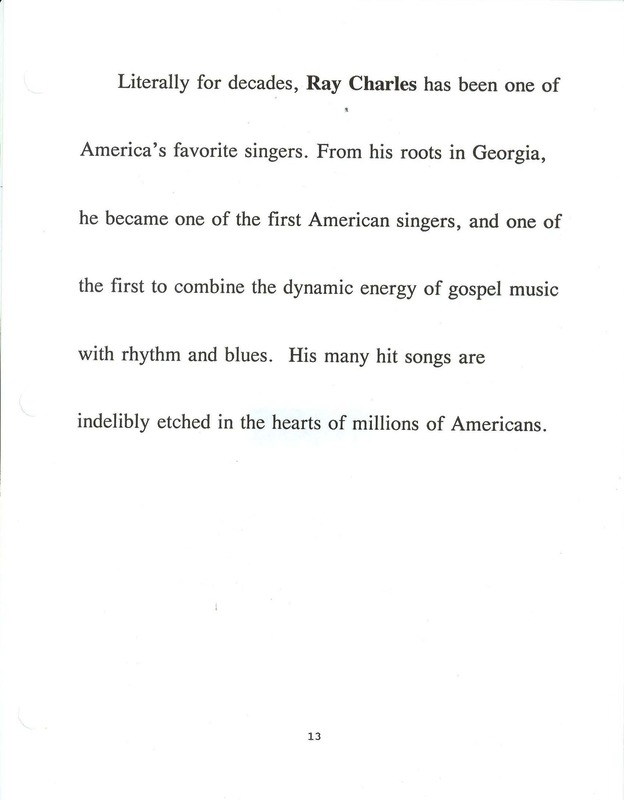 This document relates to the National Medal of Arts ceremony whereby President Clinton on October 7, 1993 handed out awards to 18 distinguished cultural figures (including Ray Charles). Amongst the people honored, the only musicians were Charles and band leader Cab Calloway. The ceremony took place on the South Lawn of the White House and featured remarks by both the President and First Lady. Clinton saved some of his best lines for Charles, declaring him to be one of “America’s favorite singers.” He made reference to the Georgia roots of the honoree and how in his hands gospel music got combined with rhythm and blues in an inventive and creative manner. Perhaps Clinton’s most memorable lines came when he said Charles’ “many hit songs are indelibly etched in the hearts of millions of Americans.” 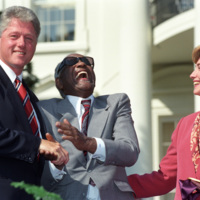 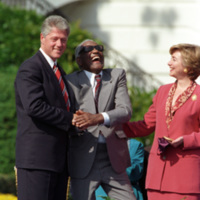 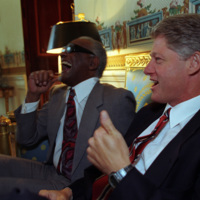 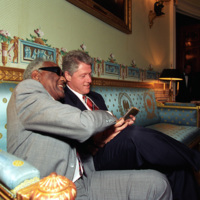