On September 18, 2020, former President Clinton released a statement concerning the death of Supreme Court Justice Ruth Bader Ginsburg. He stated that “her 27 years on the Court exceeded even my highest expectations when I appointed her.” When President Clinton nominated Ginsburg, he had hoped that she would be a consensus builder on the Supreme Court, just as she had been on the Court of Appeals.

President Clinton appointed Ruth Bader Ginsburg in his first appointment to the Supreme Court to replace retiring Justice Byron White. Ginsburg had been the co-founder of and chief litigator for the Women’s Rights Project of the American Civil Liberties Union (ACLU). This career provided her with the experience of arguing six cases before the Supreme Court, all dealing in some way with gender discrimination. President Carter appointed Ginsburg as a judge to the U. S. Court of Appeals for the District of Columbia Circuit in 1980, where she served for thirteen years. Notably, Ginsburg was one of only nine women in a Harvard Law School class of over five hundred, and the first woman  to serve on both the Harvard Law Review and the Columbia Law Review. She was confirmed by a 96-3 vote in the Senate. 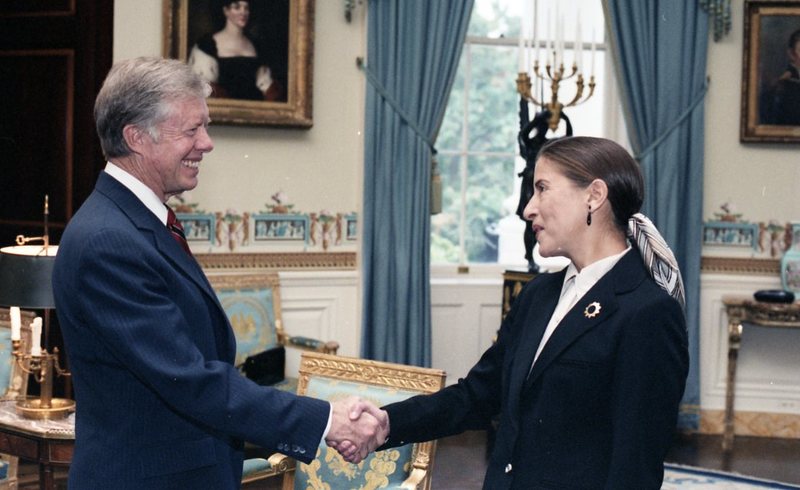 The Clinton Presidential Library has released a Freedom of Information Act (FOIA) collection concerning Justice Ginsburg’s nomination and confirmation to the Supreme Court. The collection consists of material dealing with President Clinton’s nomination of Ruth Bader Ginsburg in 1993 and Stephen Gerald Breyer in 1994 to the United States Supreme Court. The nuts and bolts of the nomination process can be seen in correspondence, memoranda, reports, lists, notes, and papers that highlight the confirmation proceedings in the Senate. Scholarly articles, speeches, interviews, decisions, and opinions by the two justices are documented in extensive detail. This collection, while released and available for research, has not yet been digitized. View Collection Finding Aid for records related to Justice Ginsburg’s Supreme Court nomination and confirmation 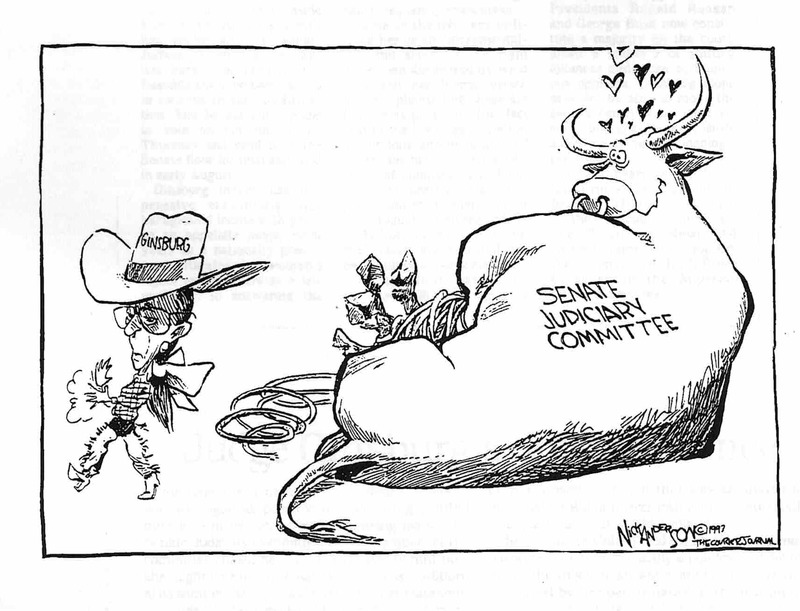 Some records from the Ginsburg and Breyer FOIA collection that were previously withheld for Presidential Records Act restrictions, have been released and digitized. View previously restricted documents concerning Justice Ginsburg’s Supreme Court nomination and confirmation

Collections and records containing administration policy related to Supreme Court cases are also available on the Clinton Digital Library. During the Clinton administration, Justice Ginsburg notably wrote the majority opinion for United States v. Virginia. This landmark case ruled on the Virginia Military Institute’s refusal to admit female cadets. The State of Virginia argued that the last remaining all-male public university was not suitable for women, and that women would require special treatment. True to her reputation as a champion of equal rights, Ginsburg wrote in her opinion, “Generalizations about ‘the way women are,’ estimates of what is appropriate for most women, no longer justify denying opportunity to women whose talent and capacity place them outside the average description.”  View digitized Clinton Presidential records concerning the United States v. Virginia

Justice Ginsburg attained cultural icon status in the 21st century for her dissenting opinion in cases concerning civil rights. In 2013, her dissent in opposition to a conservative Supreme Court became the subject of “The Notorious R.B.G.” blog created Shana Knizhni. Ginsburg famously dissented in several Supreme Court cases during the Clinton Administration.

Justice Ginsburg joined Justice Stevens in dissent of the landmark 2000 decision by the United States Supreme Court in Boy Scouts of America (BSA) v James Dale. Dale was an Eagle Scout who became an adult member of the BSA as an assistant scoutmaster in New Jersey. In the 5-4 decision, the Supreme Court ruled that the Boy Scouts of America were not required to include members or leaders that that were homosexual. Stevens wrote in his dissent, “Unfavorable opinions about homosexuals ‘have ancient roots.’ Like equally atavistic opinions about certain racial groups, those roots have been nourished by sectarian doctrine. That such prejudices are still prevalent and that they have caused serious and tangible harm to countless members of the class New Jersey seeks to protect are established matters of fact that neither the Boy Scouts nor the Court disputes. That harm can only be aggravated by the creation of a constitutional shield for a policy that is itself the product of a habitual way of thinking about strangers." View digitized Clinton Presidential records concerning the Boy Scouts of America (BSA) v. James Dale

Justice Ginsburg also joined in dissent and was openly vocal of the most controversial case of 2000; Bush v. Gore. In the 5-4 decision, the Supreme Court sided with the Bush Campaign and secured Florida’s 25 electoral votes for President Elect Bush in the 2000 Presidential Campaign. The Supreme Court suspended Florida’s recount of disputed election ballots and Justice Scalia opined, “The counting of votes that are of questionable legality does in my view threaten irreparable harm to petitioner Bush, and to the country, by casting a cloud upon what he claims to be the legitimacy of his election.” In dissent, Justice Ginsburg wrote, “...we live in an imperfect world, one in which thousands of votes have not been counted. I cannot agree that the recount adopted by the Florida court, flawed as it may be, would yield a result any less fair or precise than the certification that preceded that recount.” Ginsburg simply noted, “I dissent,” a very brief statement, noticeably different from the more commonly used “I respectfully dissent.” Ginsburg later commented that the case was an example of “how important, and difficult it is for judges to do what is legally right, no matter what ‘the home crowd’ wants.” The Clinton Presidential Library has released records concerning Vice President Gore's campaign for President. It consists of correspondence, memoranda, speech drafts, and schedules related to various aspects of the campaign. This collection is available for research but has not yet been digitized. View all records related to Bush v. Gore on the National Archives Catalog.