Sheryl Crow is an accomplished female rock’n’roll artist who emerged on the scene in the 1990s and quickly gained popularity and critical acclaim within a matter of years. Her albums and singles have charted consistently in both the Billboard 200 and Billboard Hot 100 respectively. Crow routinely incorporates elements of pop, rock, folk, country, and blues in everything she does and this certainly gets noticed by fans and critics alike. She clearly has reached the pinnacle of super stardom within just twenty years or so.

Crow didn’t get involved in popular music right away. She graduated from the University of Missouri and landed a job as a music teacher at an elementary school. During the weekends Crow sang in bands, branching out to do advertising jingles. Later on, in a 60 Minutes segment Crow revealed that doing an ad for McDonald’s netted her $40,000.

Initially starting off as a backing vocalist, Crow propelled herself to the top echelon of rock stars in a short time frame. She recorded background vocals for the likes of Stevie Wonder, Belinda Carlisle, and Don Henley. Most notably, Crow teamed up with Michael Jackson to sing “I Just Can’t Stop Loving You” during the Bad World Tour of 1987-1989.

Crow’s debut album Tuesday Night Music Club (1993) turned out to be a huge success. It spawned the hit singles “Strong Enough,” “Leaving Las Vegas,” “All I Wanna Do,” and “Can’t Cry Anymore.” The LP also garnered three Grammy Awards for Crow—Record of the Year, Best New Artist, and Best Female Vocal Performance. During the 1990s the record wound up on everybody’s playlist, eventually selling 7 million copies in the United States and Great Britain.

Altogether Crow has released eight studio albums in her career. Every one of them have sold well and generally received favorable reviews. Standouts from the collection would include The Globe Sessions (1998), C’mon, C’mon (2002), Detours (2008), 100 Miles from Memphis (2010), and Feels Like Home (2013). From The Globe Sessions came a whole slew of memorable songs: “My Favorite Mistake,” “There Goes the Neighborhood,” “Anything But Down,” and “The Difficult Kind.” “Steve McQueen,” from C’mon, C’mon, won a Grammy for Best Female Rock Vocal Performance. Detours owed its inspiration to Crow’s well-publicized breakup with longtime boyfriend Lance Armstrong and her own battle with breast cancer. 100 Miles from Memphis featured “Mississippi,” a song Bob Dylan gave to Crow before he released it himself. Her first country music project, Feels Like Home became Crow’s ninth Top Ten album.

In recent years Crow has made news by starting a family of her own. She adopted two young boys; Wyatt Stephen Crow in 2007 and Levi James Crow in 2010. They live on a 154-acre farm outside Nashville, Tennessee. 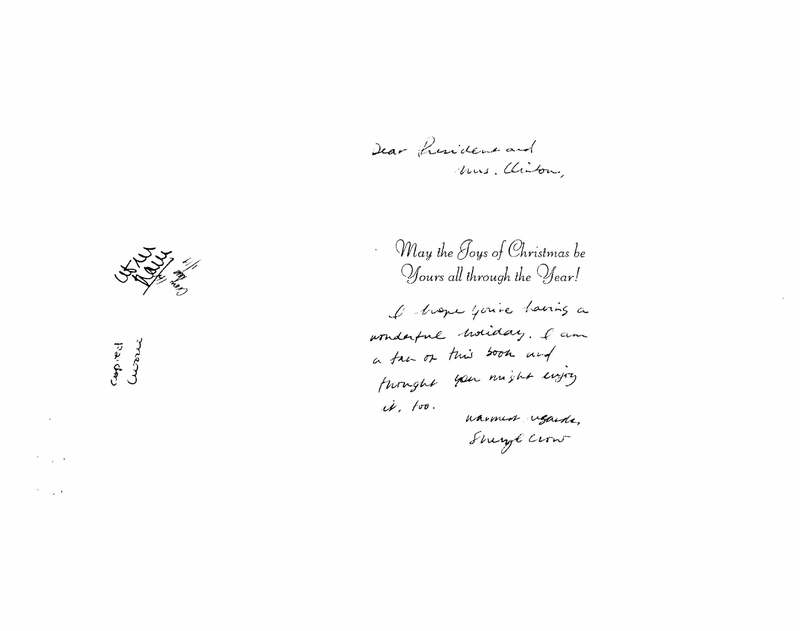 The document in question is simple and straightforward. Crow sends the book American Greats to the Clintons (apparently as a Christmas present); in the accompanying note she says she is a “fan” of the book and thought the President and Mrs. Clinton “might enjoy it, too.” 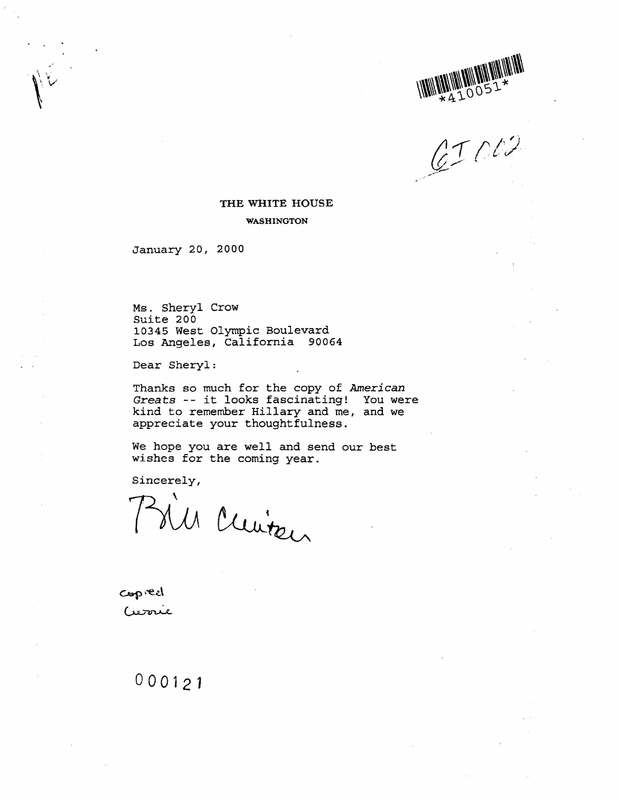 In his reply, Bill Clinton thinks the book “looks fascinating.” He goes on to thank Crow for her “thoughtfulness.” 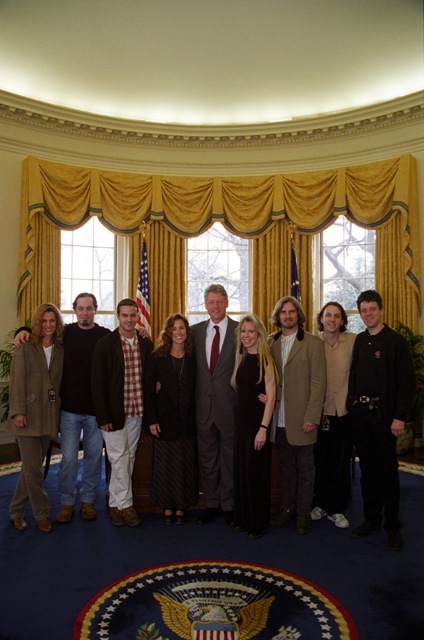 The photo is of Sheryl Crow and her entire band greeting President Clinton in the Oval Office on March 21, 1995.