The roots of the Rwandan Civil War and Rwandan genocide can be traced back to decades of tensions between the two main ethnic groups in Rwanda – the Hutu and the Tutsi. Historically, Rwanda was an independent kingdom ruled by Tutsi kings. The territory of present-day Rwanda was controlled by the German Empire from 1885 to 1916 and by the Belgian colonial empire from 1916 to 1962. The Tutsis generally controlled the political, economic, and social institutions during the German and Belgian colonial eras despite being the minority ethnic group. Tutsis historically comprise approximately 14% of the population of Rwanda, and Hutus are approximately 85% of the population. However, both the Germans and the Belgians encouraged social and economic divisions by supporting local Tutsi control through the traditional Tutsi elite. By November 1959, years of Hutu discontent with colonial and Tutsi control led to a violent Hutu rebellion. Belgian colonial authorities relented and allowed local elections that placed Hutus into positions of power and undermined the authority of the traditional Tutsi monarchy.

In 1961, Rwandans voted to become a republic, and in July 1962 Belgium split the territory of Ruanda-Urundi into the independent nations of Rwanda and Burundi. Although Hutus gained political power in Rwanda, Tutsis still controlled the military government of Burundi. Grégoire Kayibanda, founder of the Hutu Emancipation Movement Party, became the first elected President of an independent Rwanda. The establishment of political, economic, and social policies favorable to Hutus and sporadic violence against Tutsis led many Tutsis to leave Rwanda for neighboring Burundi and Uganda. In December 1963, Tutsi exiles invaded Rwanda from Burundi, which led to more retaliatory violence against Tutsis remaining in Rwanda. Kayibanda’s government persisted until 1973, when a military coup led by Juvénal Habyarimana seized power and instituted a Hutu-dominated single-party military dictatorship.

Formation of the Rwandan Patriotic Front, Civil War, and Genocide

In 1987, Tutsi refugees in Uganda Fred Rwigyema and Paul Kagame formed the Rwandan Patriotic Front (RPF) with other Tutsi refugees who had fought in Yoweri Museveni’s Ugandan rebel army during the 1980s Ugandan Bush War. On October 1, 1990 the RPF launched an invasion of Rwanda from Uganda, starting the Rwandan Civil War. After Rwigyema was killed, within the first few days of the invasion, Paul Kagame returned from military schooling in the United States and took command of the RPF. Following several years of guerilla warfare and military stalemate between the Rwandan government and the RPF, the warring factions agreed to the Arusha Accords in August 1993. This cease-fire agreement intended to integrate the RPF into the Rwandan political system and military and allow refugees to return to Rwanda.

Despite the peace efforts, on April 6, 1994 an airplane carrying Rwandan president Juvénal Habyarimana and Burundian president Cyprien Ntaryamira was shot down near Kigali International Airport. The RPF and Rwandan government blamed each other for the assassination, and in response Hutu extremists in the Rwandan military and Hutu militias began killing Tutsis and moderate Hutus in retaliation. An estimated 500,000 and possibly up to 1 million people were murdered in the approximately 100-day genocide.

In October 1993, the United Nations Security Council authorized UNAMIR (United Nations Assistance Mission for Rwanda) to assist with implementing the Arusha Accords. However, due to delays assembling the international peacekeeping force and continuing disagreements between the RPF and Rwandan government, UNAMIR fell victim to the outbreak of violence after the death of President Habyarimana. As instability increased and hostilities worsened, most of UNAMIR’s 2,500 personnel withdrew from Rwanda. In May 1994, the UN Security Council authorized UNAMIR II to increase the size of the peacekeeping force in Rwanda. However, further delays in assembling the required international military forces and the rapid nature of the violence meant that UNAMIR II failed to stop the genocide. The most significant international force deployment involved the French, who in June 1994 set up a “humanitarian safe zone” in southwestern Rwanda along the border with Zaire and Burundi. However, this was controversial due to prior French support of the Habyarimana government.

The role of the United States in responding the Rwandan genocide focused primarily on humanitarian aid. The massacre of Tutsi and subsequent military offensive by the RPF created a massive humanitarian and refugee crisis. The Clinton Administration opposed direct military intervention and large-scale UNAMIR deployment in Kigali, but expressed support for humanitarian assistance and a UN peacekeeping force to protect refugees in border areas. In April 1994, the U.S. called for an immediate cease-fire and renewed negotiations per the Arusha Accords. At a July 22, 1994 press conference, President Clinton requested Congress provide $320 million in emergency relief for Rwandan refugees and announced measures for humanitarian relief and supply airlifts. Overall, the U.S. shipped 100,000 metric tons of food and earmarked $250 million towards humanitarian relief efforts. After the RPF took control of Rwanda and ended the genocide, the U.S. government pledged to work with the UN to set up a war crimes tribunal and human rights monitoring, encourage national reconciliation with the new government of Rwanda, and create conditions for refugees to return.

End of the War and Aftermath

Shortly after the genocide began, RPF military forces resumed hostilities against the Rwandan government and launched a military offensive. In July 1994, the RPF defeated the Rwandan military and seized control of Rwanda with Paul Kagame as de facto leader. Kagame has been President of Rwanda since 2000. On March 25, 1998 President Clinton spoke at Kigali Airport in Rwanda and met with survivors of the genocide. He expressed regret for not publicly acknowledging the genocide in 1994, and regretted the lack of a strong and immediate multilateral international response to end the genocide. The President also pledged to work more closely with the international community to prevent and stop future genocide immediately, announced the U.S. would contribute $2 million to the Genocide Survivor’s Fund, and stressed accountability for those who abuse human rights. 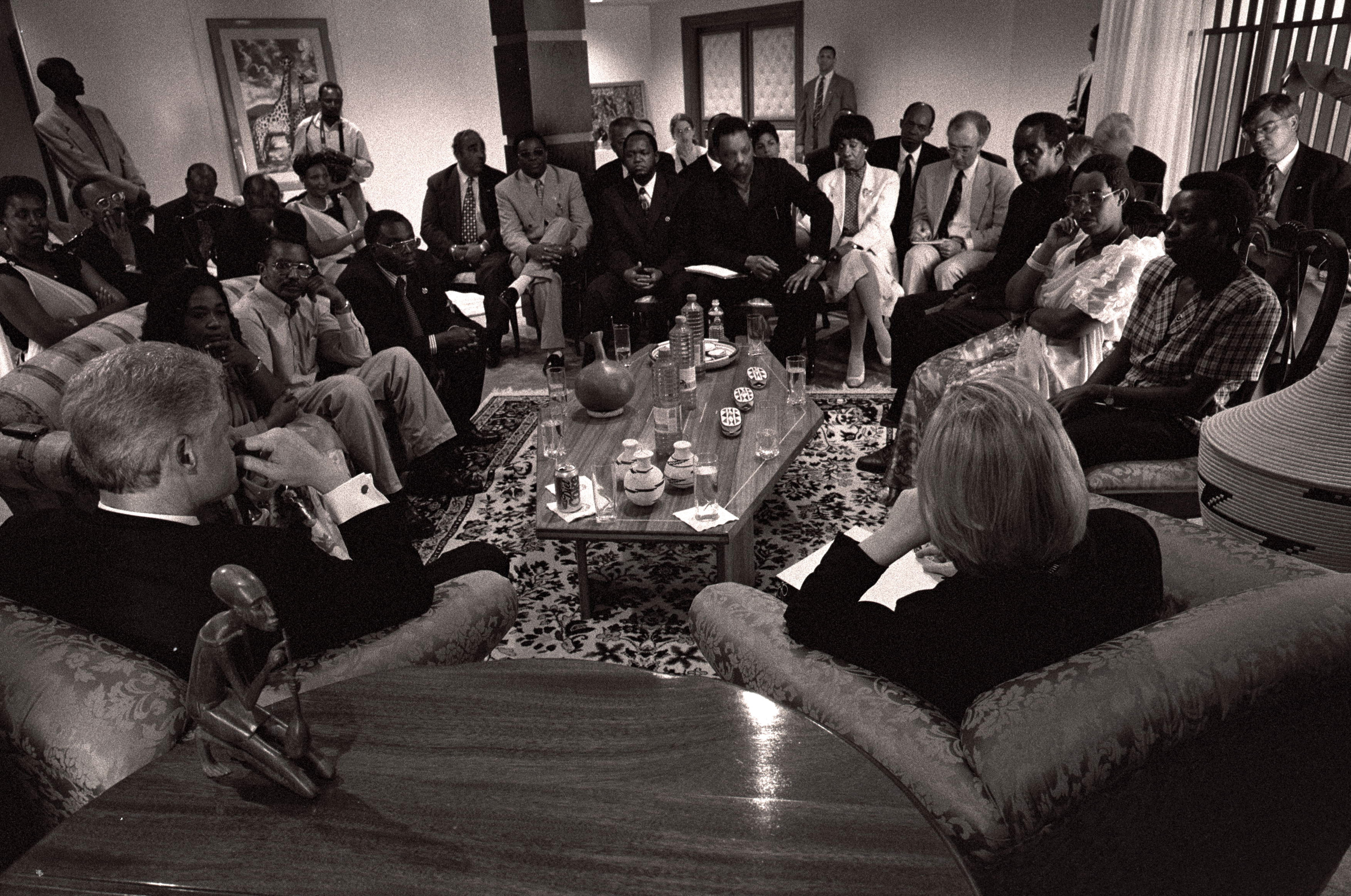 Digitized Collections on Rwanda and the Rwandan Genocide

2006-0186-F
This collection consists of records relating to Jennifer Ward, the Senior Director of African Affairs and Rwanda from 1993-1994. Records concern the U.S. reaction to the 1994 genocide in Rwanda. View digitized records

2006-0192-F
This collection consists of records relating to MacArthur DeShazer, who served as Director of African Affairs at the National Security Council during the Clinton Administration, and United States policy towards Rwanda from 1993-1994. Memoranda, reports, correspondence, papers, cables, and emails make it clear that DeShazer’s major concern revolved around mounting relief operations at the height of the genocide taking place in Rwanda. All of the Chief of Staff files had already been pulled for previous FOIA cases vis-à-vis the slaughter capturing the world’s attention. View digitized records

2006-0218-F
This collection consists of records concerning Donald Steinberg, Senior Director for African Affairs on the National Security Council, and the policy of the Clinton Administration towards Rwanda from 1993 to 1994. These records include reports, memos, correspondence, press briefings, and United Nations documents. The topics include humanitarian assistance rendered by the United States, information regarding the legal issues such as the application of the War Powers Act to Rwanda, genocide, press coverage of Rwanda, and the incoming Rwandan government. View digitized records

2006-0230-F
The records of Susan Rice document the role she played in shaping the policy of the Clinton Administration relating to the carnage that erupted in Rwanda in the spring of 1993. Records in this collection include correspondence, reports, papers, memos, and press releases. A considerable amount of material deals with the establishment and peacekeeping operations of UNAMIR (United Nations Assistance Mission for Rwanda). The NSC Cable, Email, and Records Management Systems have a number of letters from members of Congress urging President Clinton to dramatically increase humanitarian assistance to Rwanda. View digitized records

2006-0235-F
This collection consists of records dealing with Richard Clarke, who served on the National Security Council during the Clinton Administration, and United States policy towards Rwanda from 1993-1994. Memoranda, papers, talking, points, agendas, reports, cables, and emails show that Clarke wanted to limit American involvement in Rwanda. Much of the material deemed responsive had already been pulled for FOIA cases directly concerning genocide in the African country. View digitized records

2006-0238-F
This collection consists of records related to Nancy Soderberg, Deputy Assistant to the President for National Security Affairs from 1993 to 1997, and Rwanda. The records include reports, papers, memos, correspondence, handwritten notes and maps. The topics covered by these records include the humanitarian effort of the U.S. and other countries to deal with the thousands of refugees fleeing Rwanda. View digitized records

2006-0312-F
This collection contains the records of National Security Advisor Anthony "Tony" Lake as they relate to Rwanda. The records consist of letters, memos, news articles, emails, and cables. Among this correspondence are letters reporting to Congress on the level of the United States’ military involvement, in accordance with the War Powers Resolution. Other correspondence illustrates, in part, the huge effort made by the United States, as well as, non-government organizations and international organizations to provide humanitarian aid to Rwanda and the surrounding area. View digitized records

2008-0549-F
This collection consists of correspondence from President Clinton to Representative Christopher Smith regarding the U.S. involvement with the Rwandan military. It also contains memoranda from White House staff to President Clinton regarding his reply to Representative Christopher Smith. This collection has not yet been digitized, but it is available for research. View collection finding aid

2013-0540-F
This collection contains records related to a conversation held at approximately 1741 on April 10, 1994 between Ambassador to the Republic of Rwanda, David Rawson and President William J. Clinton. The records relating to this conversation consist of one cable, one email, and one set of talking points. View digitized records

2017-0042-F
This collection consists of correspondence between the White House and the Congressional Black Caucus (CBC) related to Rwanda and dating from April 7, 1994 to October 31, 1994. The collection contains correspondence authored by Kweisi Mfume (CBC Chair) and Donald Payne (Ranking CBC Member) regarding all possible supportive actions to stop the genocide in Rwanda. This collection has not yet been digitized, but it is available for research. View collection finding aid

“Outreach Programme on the 1994 Genocide Against the Tutsi in Rwanda and the United Nations.” United Nations. Accessed September 21, 2020. https://www.un.org/en/preventgenocide/rwanda/index.shtml.