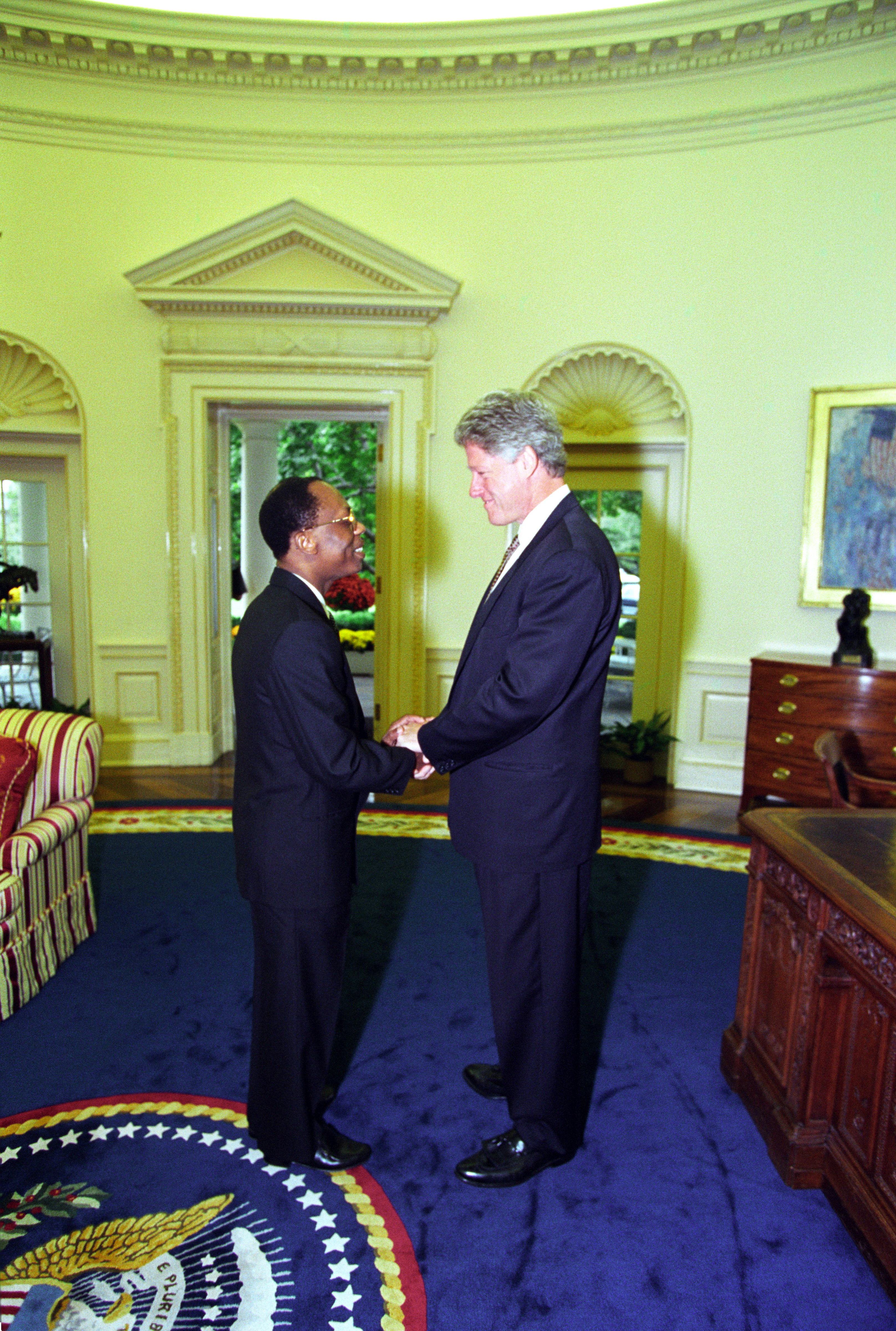 Jean-Bertrand Aristide was born in Haiti in 1953. After receiving an education at the Collège Notre-Dame du Perpetuel Secours, the State University of Haiti, and the Grande Seminaire Notre Dame, he became an ordained Salesian priest. Assigned to a parish in the Haitian capital of Port-au-Prince, Aristide embraced liberation theology and preached in opposition to the regimes of dictator François “Papa Doc” Dulavier and his son Jean-Claude “Baby Doc” Dulavier. Aristide eventually became the leader of the “ti legiz” movement against the Dulaviers. In 1990, Aristide successfully ran for President of Haiti at the head of the new political party, Organization Politique “Lavalas” (OPL). Although President Aristide was able to bring about some reforms during his first months in office, opposition from businessmen and the military led to a coup d’etat which forced him into exile on September 29, 1991.

Aristide first fled to Venezuela and then to the United States, where he resided for the duration of his exile. From October 1991 to September 1994, a military junta governed Haiti. During this period, the Haitian government was primarily controlled by Army General Raoul Cédras. This brutal military dictatorship was characterized by widespread and systematic human rights violations. It has been estimated by the UN that government and paramilitary forces killed upwards of 4,000 Haitians and forced hundreds of thousands more to flee into the neighboring Dominican Republic and to risk emigration across open water.

During the violent years of 1991-1994, many thousands of Haitians crowded into unseaworthy boats in an attempt to seek asylum in the United States. Continuing the policy of his predecessor George H.W. Bush, the Clinton administration responded to this massive wave of immigration by interdicting the refugees at sea and repatriating them back to Haiti. This Haitian refugee policy went through many changes and legal maneuverings in U.S. courts in response to a public relations campaign by human rights activists. Eventually more than 30,000 Haitians were detained in a legal limbo at the U.S. naval base in Guantanamo Bay, Cuba. 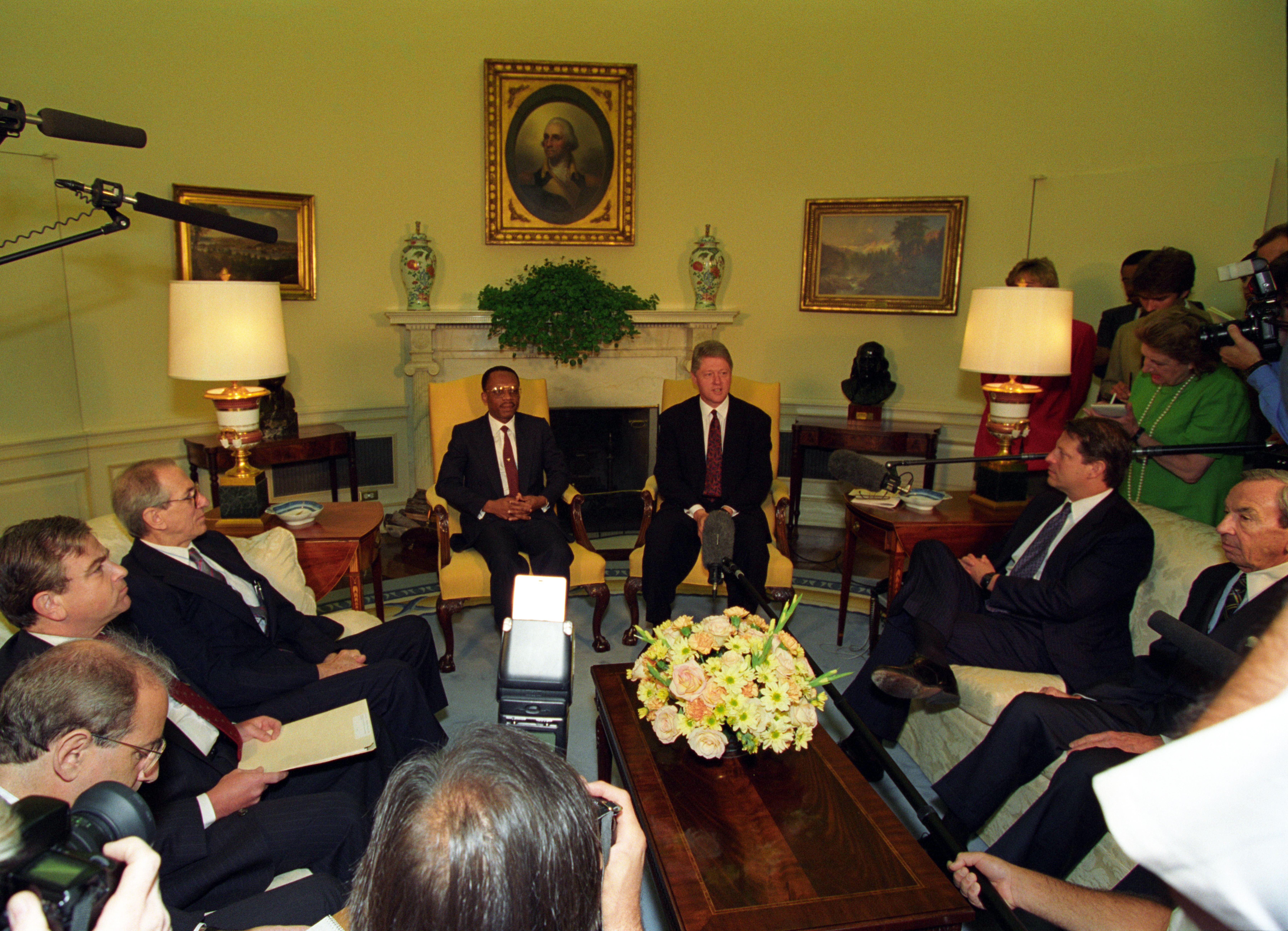 Two months after taking office, on March 16, 1993, President Clinton invited the exiled Aristide to the White House. In a press conference during that visit, President Clinton made it very clear “that the United States [was] committed strongly to a much more aggressive effort to restore Mr. Aristide to his presidency.”

In July 1993, under international pressure in the form of sanctions, Aristide and Cédras met at Governors Island, New York, to discuss terms for Aristide’s return to Haiti and resolution of the political crisis. The resulting document, the Governors Island Accord, specified these terms, including the appointment by Aristide of a new prime minister, the granting of amnesty for members for those involved in the coup, and the return of Aristide in October 1993. However, political violence increased making his return impossible. The Clinton administration imposed new sanctions on Haiti for violating the accord. President Clinton and his advisors consistently met from October 1993 through September of 1994 to discuss the deteriorating situation in Haiti. No option was left off the table, including military intervention. President Clinton and Deputy National Security Advisor Sandy Berger often spoke with President Aristide to assure him of their full support and the support of the American people. At a meeting at the White House in December 1993, President Aristide pleaded with President Clinton to take immediate action in Haiti for the sake of his people. He said, “Haiti will collapse if there is no solution to the crisis very soon. Please keep helping us, we need to save our country, of course by reconciliation and by restoring democracy, but we need concrete steps soon or we will lose too many people, in fact our entire country. We need a chance to succeed with you by our side. Haitians are dying standing up, as heroes. They are sending a historic SOS.”

On July 31, 1994, the United Nations Security Council adopted Resolution 940, which authorized the deployment of a multinational force under American leadership to restore Aristide to the presidency of Haiti.

On September 15, 1994, President Clinton addressed the nation via televised remarks concerning the decision to lead the UN’s military intervention in Haiti. President Clinton stated that he had ordered Secretary of Defense William Perry to call up the military reserve personnel necessary to support U.S. Troops in “any action” that he might take in Haiti. Clinton stated that such action was necessary to stop the brutal atrocities of the military junta, secure United States borders, and uphold democracy. President Clinton’s message to Cédras and his brutal military regime was clear: “Your time is up!" 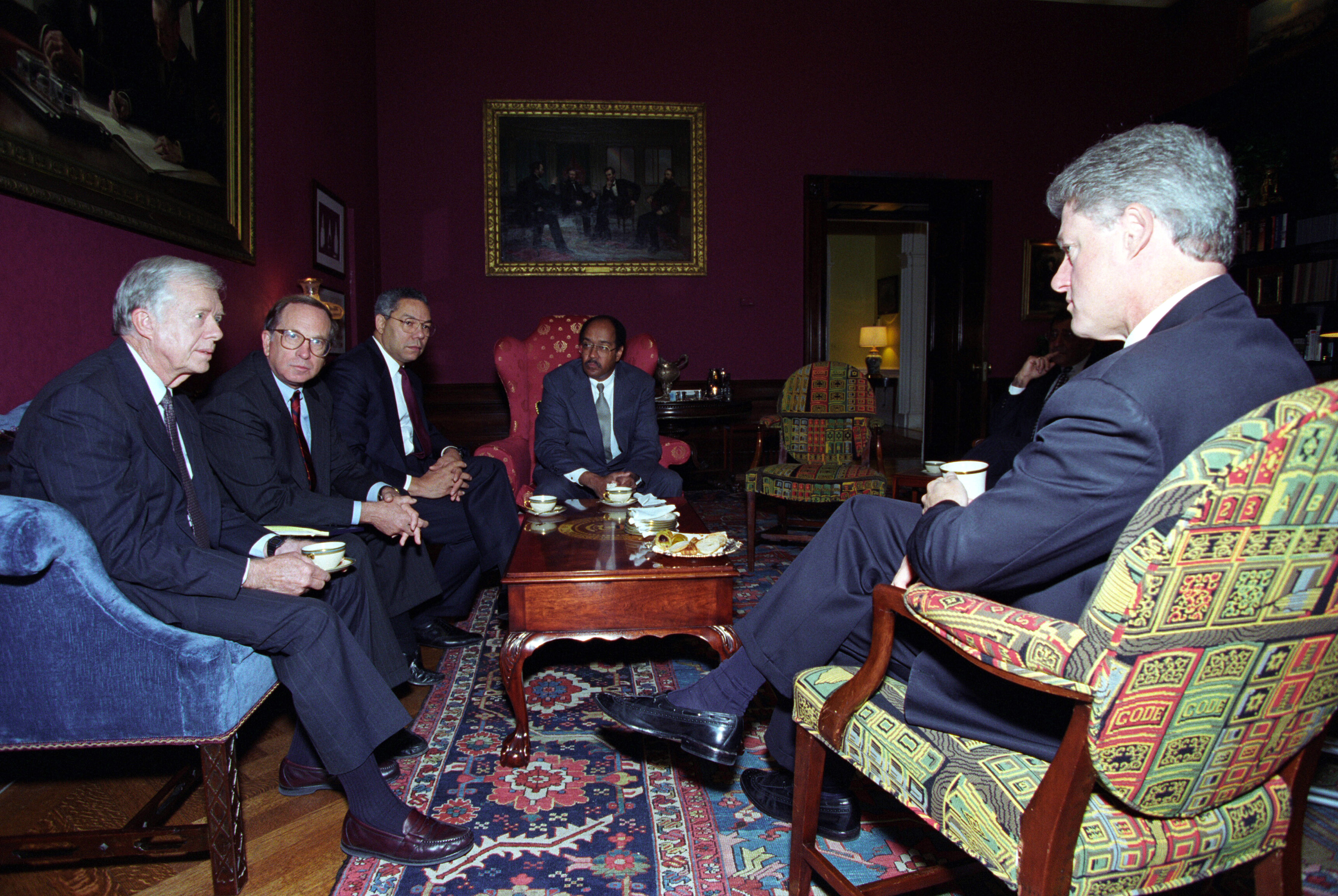 September 17, 1994, President Clinton ordered U.S. forces to prepare to launch a military intervention (Operation Restore Democracy) to restore the democratically elected Aristide to power. In order to avoid a potential invasion of Haiti, President Clinton also dispatched a last-minute diplomatic team of former President Jimmy Carter, Former Chairman of the Joint Chiefs of Staff General Colin Powell and Senator Sam Nunn (D-GA). This two-prong approach of diplomacy backed with the threat of military invasion was successful. The agreement negotiated by Carter, Powell, and Nunn contained several related components: it ensured that the Haitian Military would not respond with force upon the U.S. intervention; it set a date for the removal, and paved the way for amnesty for General Cedras and other coup leaders from power; and it required that police and military forces cooperated with U.S. Military and UN forces. Cédras resigned and left for exile in Panama in early October 1994.

The Operation Uphold Democracy consisted of U.S. troops and the UN organized Multinational Force (MNF). The operation’s mission changed from a combat operation to a peace-keeping and nation-building operation and lasted from September 19, 1994 to March 31, 1995.

In March of 1995 U.S. forces were replaced by the United Nations Mission in Haiti (UNMIH). U.N. forces under various mission names were in Haiti from 1995 through 2000. A large contingent of U.S. troops (USFORHAITI) participated as peacekeepers in the UNMIH until 1996. During the more than 6 years of U.S. military operations in Haiti, only one U.S. service member was killed by hostile fire.

Aristide returned to Haiti on October 15, 1994. During the remainder of his first term in office, President Aristide created a civilian police force in place of the Haitian army, which he disbanded. The Haitian Constitution, which does not allow for consecutive presidential terms, prevented Aristide from running for reelection in the fall of 1995. Although some felt that Aristide’s term should have been extended by three years due to his exile, Aristide left the presidency on February 7, 1996. His first Prime Minister, René Préval suceeded him. Throughout President Préval’s term, Aristide remained an active political figure. In 1996, he abandoned OPL, which changed its name to Organisation du Peuple en Lutte, and created the Fanmi Lavalas party. As the head of this party, Aristide successfully ran again for the Haitian presidency in the fall of 2000. His second term in this office began on February 7, 2001.

2006-0650-F Sement 2 Records related to U.S. intervention in Haiti: This second segment of the collection primarily comprises electronic records (cables and e-mails) and records management numbered documents not produced in the first segment or in related FOIA. It contains travel approvals, correspondence, reports to congress, a limited amount press reporting, meeting announcements and agenda, talking points, political and legal analysis.  This collection has not yet been digitized, but it is available for research. View collection finding aid

2006-0651-F Records related to Jean-Bertrand Aristide: The records in this collection, dating from January 1993 to January 2001, consist of emails, cables, and correspondence concerning the Clinton administration’s relationship with Aristide, as well as the latter’s return to Haiti in 1994. This collection has not yet been digitized, but it is available for research. View collection finding aid

2006-0187-F Records related to communication between President Clinton and National Security Advisor, Anthony Lake concerning Haiti: This collection contains materials from the White House staff office of the National Security Council (NSC), from 1994. Records include correspondence, memoranda, newspaper articles, press releases, reports, and talking points. The majority of the materials are letters from President Clinton to various members of Congress. The President's letters are in response to congressional members whose original correspondence questioned the President's authority to use force without prior approval by Congress. This collection has not yet been digitized, but it is available for research. View collection finding aid

2013-0983-F Haiti Subject Files: This collection consists of records related to Haiti from 1993 through 2000 including immigration policy, diplomacy, the 1994 military intervention, and refugee issues. It contains correspondence to and from Congress, correspondence with activists and concerned citizens, memorandum, speeches, talking points, and administrative reports. View digitized records