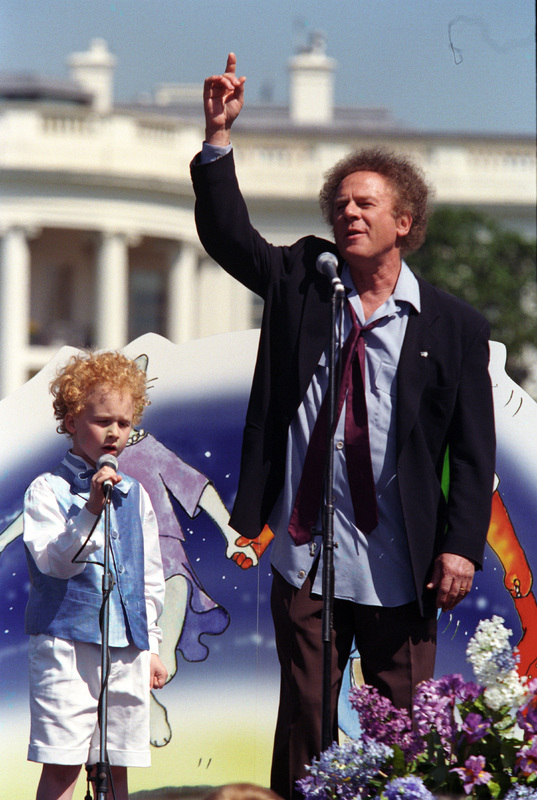 A member of one of the greatest duos in the history of rock’n’roll, Art Garfunkel has been in the music business for a period of over sixty years. He started off as a teenager at the tender age of sixteen, formed a partnership with Paul Simon that produced some of the most memorable songs of their generation, pursued a distinctive solo career, and starred in a number of transcendent movies. Garfunkel’s tenor singing voice and acting prowess propelled him to stardom in an age of transformative change and cultural flux.

Born in Forest Hills, Queens, New York City in 1941, Arthur Ira Garfunkel met Paul Simon in the sixth grade in 1963 when they both performed in the elementary school graduation play Alice in Wonderland . Their friendship mushroomed into a musical duo that initially gave no hint of the greatness awaiting them. A famously recounted story has Simon developing an infatuation with singing after hearing Garfunkel deliver a rousing rendition of Nat King Cole’s “Too Young” at a school talent show.

The two idolized the Everly Brothers and copied the manner in which they used intimate two-part vocal harmony. Being underage, the partners employed a low key approach in their entry into the local music scene. Adopting the name of “Tom and Jerry,” Simon and Garfunkel sang sporadically at school dances. They recorded poppish tunes such as “Hey, Schoolgirl” (which reached number 49 on the pop charts), “Beat Love,” and “Dream Alone.” Simon and Garfunkel performed under the nom de guerre of “Tom and Jerry” from 1956-1962. 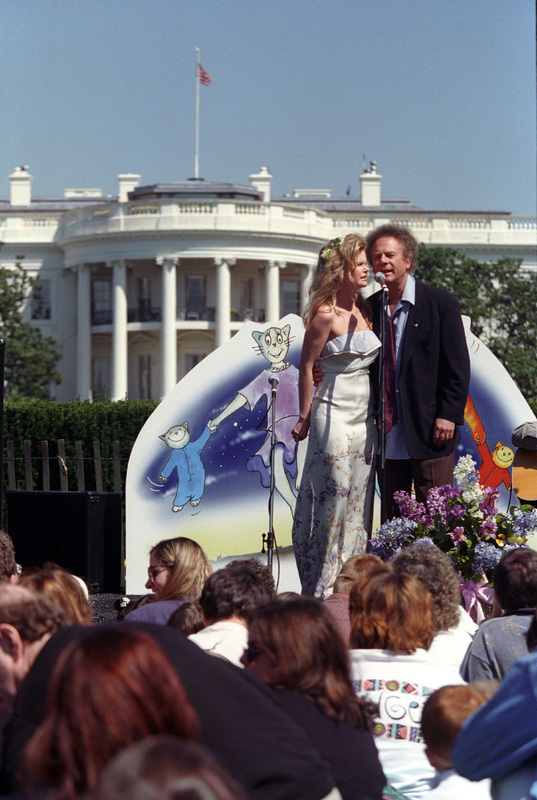 Reuniting in 1963 as “Simon and Garfunkel,” the two went on to record five studio albums that made them into rock’n’roll icons. However, they met with failure at first as Wednesday Morning, 3 A.M. released in October 1964 on Columbia Records bombed both critically and commercially. Devastated, the duo split with Simon going to England intent on becoming a successful solo artist. Garfunkel, for his part, continued his studies in art history at Columbia University. The intrepid producer of their initial foray into popular music, Tom Wilson, was shocked to learn that “Sound of Silence,” a cut from the album, had started to receive extensive airplay on radio stations in Boston, Massachusetts and all over Florida. He hit on the bright idea of re-mixing the song by overdubbing electric instrumentation. In the end, “Sound of Silence” was released as a single in 1965 and shot up the charts, peaking at number one on the Billboard Hot 100 for the week ending January 1, 1966. Fittingly for such a rags to riches fable, Simon and Garfunkel only found out about what had happened to their work after the fact. That is, they weren’t informed of the decision to fiddle around with “Sound of Silence”; the duo was presented with a fait accompli.

In quick succession Simon and Garfunkel put out their next four records before splitting up, a stunning move that astonished the entertainment world. These albums were, in order, Sounds of Silence (trying to build on the success of the hit single), Parsley, Sage, Rosemary and Thyme (both 1966), Bookends (1968), and the huge blockbuster Bridge Over Troubled Water (1970). Their final effort turned into a worldwide phenomenon, selling in the neighborhood of 25 million copies. Over time the two found themselves increasingly at odds with each other, quarreling more and more often. They waited until the end of 1970 to make it official. According to them, “personal differences” and “divergent career interests” were the main culprits in the break-up. Solo projects ruled the day for the two men—Simon in music and Garfunkel in movies. 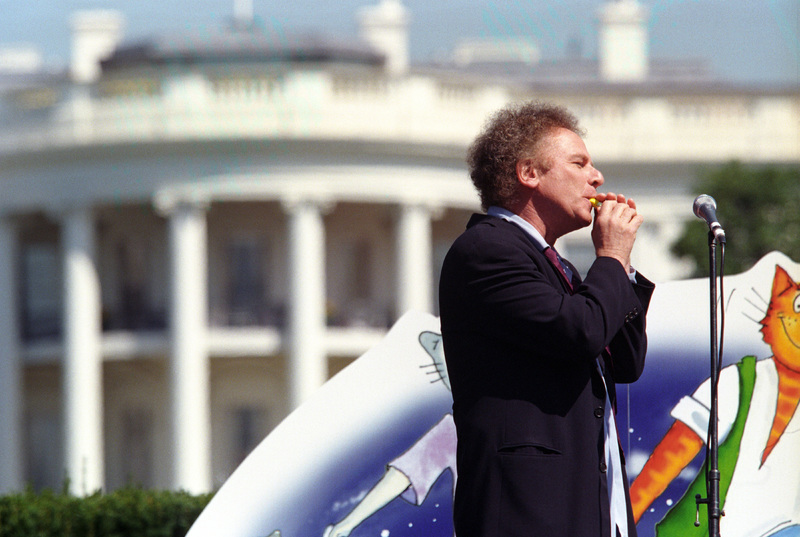 Garfunkel’s sweet tenor voice constituted his major contribution to the storied duo. Simon, one of the preeminent songwriters in the history of rock’n’roll, penned the lyrics for such unforgettable tunes as “The Boxer,” “I Am a Rock,” and “El Condor Pasa (If I Could).” His partner earned kudos for being the vocal arranger for the two men who, in the words of a Wikipedia article, “worked out who the songs would be sung by and how each song was produced.”

The budding movie career of Garfunkel proved to be a source of irritation for Simon. Starring in two Mike Nichols films Catch-22 (1970) and Carnal Knowledge (1971), Garfunkel displayed acting skills unusual for a novice in the profession and gained widespread favorable recognition from critics and pundits. In 1969 he went to Mexico to shoot Catch-22 on location; Simon had the songs for Bridge Over Troubled Water ready and wanted to go into the studio, but Garfunkel wasn’t available. Peter Ames Carlin in his book Homeward Bound: The Life of Paul Simon says he wasn’t happy about the matter:

"Artie the movie star. Mike Nichols telling everyone what a great, natural actor he was. So much presence. So much feeling in his dialogue. And so, so handsome. Movie star looks they kept saying. . ."

From 1973 to 2007 Garfunkel released ten solo albums. Although reasonably well received both commercially and critically, they paled in comparison to Simon’s solo work. In chronological order the records were as follows: Angel Clare (1973), Breakaway (1975), Watermark (1977), Fate for Breakfast (1979), Scissors Cut (1981), The Animals’ Christmas (with Amy Grant) (1986), Lefty (1988), Songs from a Parent to a Child (1997), Everything Waits to Be Noticed (with Maia Sharp and Buddy Mondlock) (2002), and Some Enchanted Evening (2007). The best of the group, Watermark contained Garfunkel’s version of Sam Cooke’s hit “(What a) Wonderful World.” Simon and James Taylor contributed backing vocals to the song: it peaked at number one on the Adult Contemporary chart and seventeen on the pop chart. 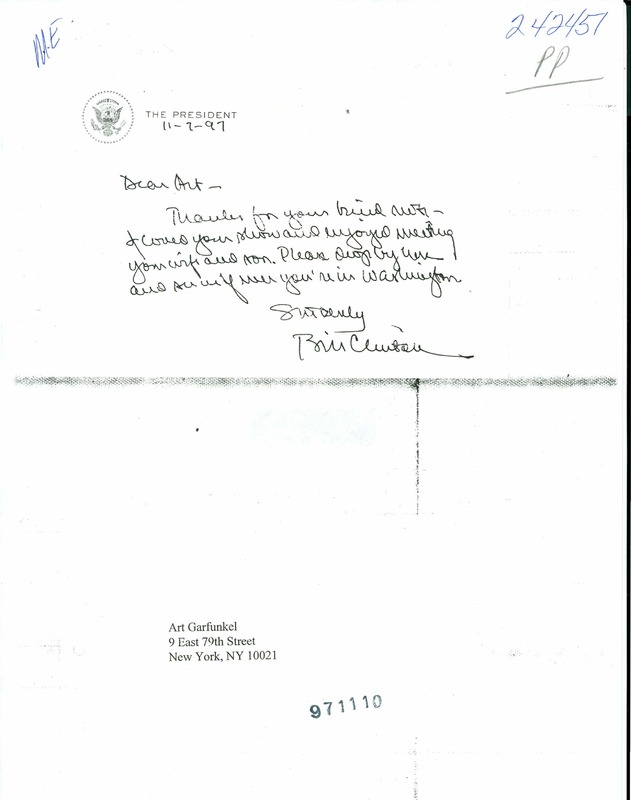 The document from our collection highlights an exchange of brief notes between President Clinton and Garfunkel. The two apparently met at the White House sometime in 1997. Accompanying Garfunkel were his wife Kim Cermank and seven-year-old son James. Clinton expresses his pleasure at seeing all of them. He encourages Garfunkel to “drop by” if he ever gets back to Washington. The reply of the rock star is remarkable for its forthright language and genuine admiration of Clinton. He says, “You must know that you make people feel very good about themselves when you shine on them your extraordinary likeability.” 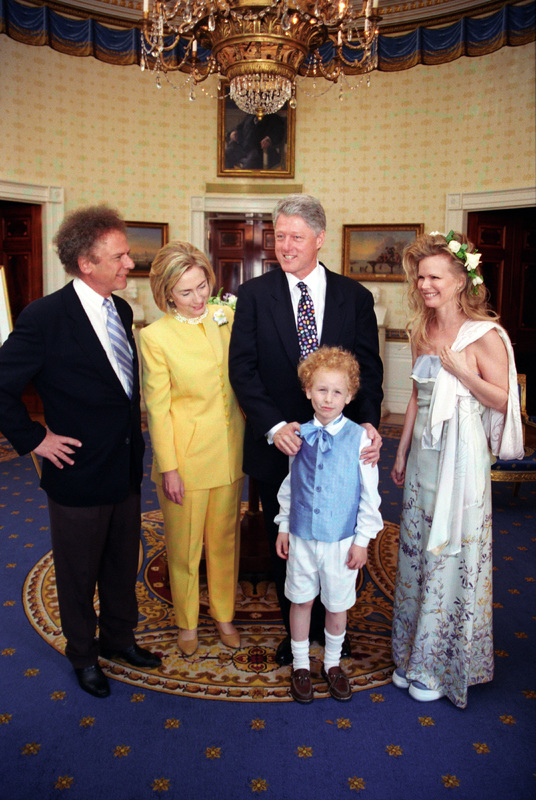