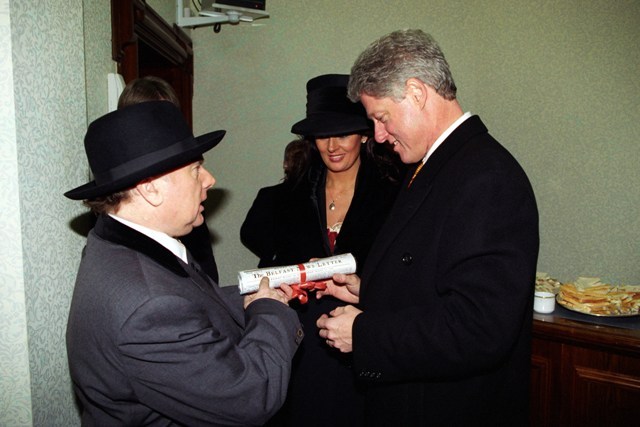 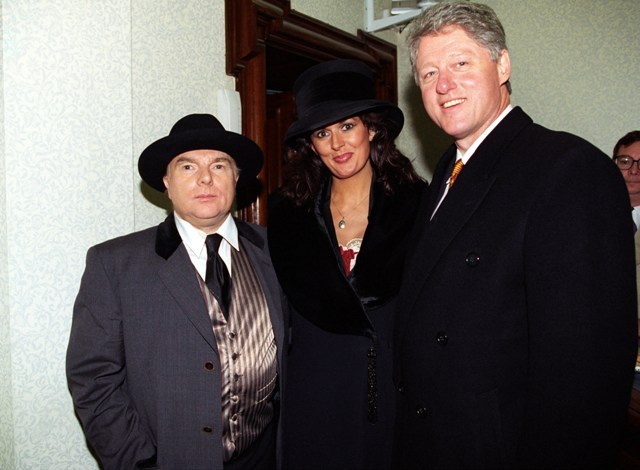 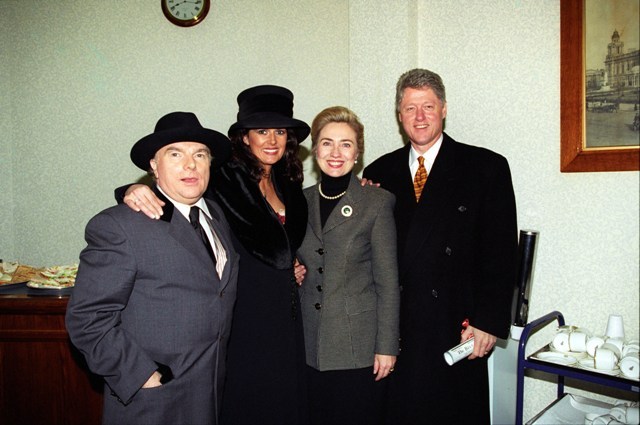 Emerging from Belfast, Northern Ireland, “Van the Man” and “The Belfast Cowboy” (his nicknames), began making a mark in rock’n’roll in the 1960s and left behind a musical legacy of staggering proportions.

George Ivan Morrison, his birth name, first gained recognition on the music scene in Ireland in 1964 with the formation of the rock band Them. The group made a name for itself with its live shows at a new R&B club at the Maritime Hotel in Belfast. Playing saxophone and harmonica and sharing vocals, Morrison adhered to no set routine and often times ad libbed, creating songs on the spot. Them (the name came from the fifties horror movie Them) charted three times with “Baby, Please Don’t Go” (1964), “Here Comes the Night” (1965), and “Mystic Eyes” (1965). However, “Gloria,” a garage band classic composed by Morrison, over the years came to be almost idolized by fans and occupied a position of royalty in the pantheon of rock’n’roll songs. It was ultimately covered by Patti Smith, the Doors, Jimi Hendrix, and many other artists. When Morrison sang “Gloria” in concert he would, depending on his mood and inclination, stretch it out to twenty minutes, going through an amazing range of vocal dynamics.

One more fascinating note concerning Them: As part of the British invasion and hoping to build on the success of their singles in the United States, Van Morrison and his bandmates descended on America for a short tour in May and June of 1966. The highlight of this excursion definitely occurred at the mythic Whiskey-a-Go-Go in Los Angeles when in the last week of a residency at the club Them took on the Doors as a supporting act. Jim Morrison, according to John Densmore (the drummer for the Doors) in his book Riders on the Storm, aped his counterpart’s stagecraft, assuming an “air of subdued menace” for effect on more than a few occasions. On the final night, the two Morrisons got their bands together and led a spirited jam session that peaked with an extended version of “Gloria.”

After leaving Them in 1966, Morrison embarked on a solo career that has at last count encompassed nearly fifty years and produced innumerable classic songs and albums. Meeting with limited success as far as getting singles to chart in the Billboard 100, he did manage to place eleven songs in the United States. They include: “Brown-Eyed Girl” (1967), “Come Running” (1970), “Blue Money,” “Domino,” “Wild Night,” and “Call Me Up in Dreamland” (1971), “Redwood Tree,” “Tupelo Honey,” and “Jackie Wilson (I’m in Heaven When You Smile)” (1972), “Moondance” (1977), and “Wavelength” (1978). Two of the songs—“Brown-Eyed Girl” and “Moondance”—made the list of the Rock and Roll Hall of Fame’s 500 Songs that Shaped Rock and Roll.

Much more of an artist geared to producing LPs, Morrison has turned out albums of an eclectic and distinctive nature . Many times they have met with an indifferent or even a hostile reaction from rock journalists and fans—at least at first. Such would be the case with Astral Weeks (1968) and Veedon Fleece (1974). Recognized now as one of the greatest albums of all time, Astral Weeks created very little stir upon its initial release. Described as a “mystical song cycle,” it came out when Morrison, in his own words, “was starving, literally.” Even today critics and fans alike can’t identify a musical genre that would fit Astral Weeks. Alan Light, a noted surveyor of the popular music scene, described the work as “like nothing he [i.e. Morrison] had done previously—and really, nothing anyone had done previously. Morrison sings of lost love, death and nostalgia for childhood in the Celtic soul that would become his signature.”

Consisting of ten songs, Veedon Fleece garnered little in the way of attention when released in 1974. Over the years the LP grew in stature and earned kudos for being one of Morrison’s most poetic works. Clocking in at eight minutes and fifty one seconds, “You Don’t Pull No Punches, But You Don’t Push the River,” brims with references to the visionary poet William Blake and draws parallels between the Holy Grail and the Veedon Fleece. The song shows Morrison in fine form with its lengthy cryptic, hypnotic style.

The accomplishments and awards received by Morrison during the course of a career spanning close to half a century are truly spectacular. From 1967-2015 he put out thirty-nine albums (thirty-three studio and six live), the most recent being Duets: Re-working the Catalogue. Two of his albums (Astral Weeks and Moondance) and two of his songs (“Brown-Eyed Girl” and “Gloria”) are in the Grammy Hall of Fame. Nominated for six Grammys, Morrison has won two of the coveted awards. He won for Best Pop Collaboration with Vocals in 1996 (with The Chieftains for “Have I Told You Lately That I Love You”) and in 1998 (with blues legend John Lee Hooker for “Don’t Look Back”). The Northern Irish singer has been inducted into several music halls of fame. They include the Rock and Roll Hall of Fame in 1993 (the cantankerous Morrison decided not to perform at the induction ceremony), the Irish Music Hall of Fame in 1999, and the Songwriters Hall of Fame in 2003. Perhaps Morrison’s most prestigious award came just a few months ago when on June 12 he was knighted by Queen Elizabeth II “for his services to music and tourism in Northern Ireland.” He officially became Sir Van Morrison and joined fellow musicians Sir Elton John, Sir Paul McCartney, and Sir Mick Jagger in receiving such an honor.

Photos center around when President Clinton became the first sitting American president to visit Northern Ireland on November 30, 1995. He was scheduled to address a crowd estimated to be close to 100,000 in Belfast on that night. Van Morrison gave an approximately thirty minute performance prior to the appearance of Bill and Hillary Clinton. The highlight of the show turned out to be “There’ll Be Days Like This,” a Morrison composition which was seen as being the unofficial anthem of the Irish peace process. The crowd grew increasingly restless and began chanting “We want Bill. We want Bill.” A rumor spread that Clinton would join Morrison onstage and play a saxophone. Unknown to the thousands in the streets of Belfast, security concerns had nixed any idea of the two men appearing onstage together. President Clinton and the First Lady made a grand entrance, with Bill pounding the podium and declaring to the cheering masses, “The people want peace and the people will have peace.”