Economic Inclusion in the Clinton Administration 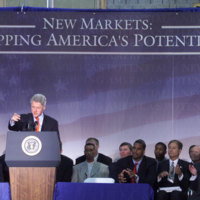 This exhibit focuses on the Clinton administration’s efforts to help all Americans benefit from economic prosperity. It outlines President Clinton’s work with the Community Development Financial Institutions Fund, empowerment zones, enterprise communities, and New Markets initiatives, and also serves as an opportunity to research economic policies in both the Clinton Presidential Archives and the archival collections of Governor Clinton. 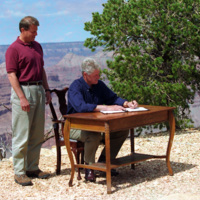 This exhibit highlights digitized documents and photographs that reflect the President Clinton’s commitment to the environment. The exhibit addresses the Greening of the Federal Government, investing in renewable energy, protecting natural resources, and the Kyoto Protocol. President Clinton continued in his commitment to the environment after his Presidency by building the William J. Clinton Presidential Library and Museum, which has received the highest "green building" rating. This exhibit was displayed in the Presidential Library from September 8, 2018 to March 24, 2019. 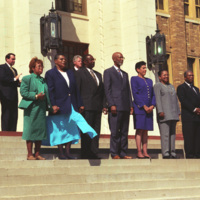 This online exhibit revisits the 1957 Central High crisis in Little Rock, Arkansas. Select quotes of President Clinton’s speech at the 40th Anniversary Commemoration are highlighted, along with an examination of the speechwriting process for crafting the remarks. The exhibit includes documents and images from the archives at the Clinton Library, and also provides links to additional historical material maintained by other institutions.

In September 2017, we commemorate the 60th Anniversary of the desegregation of Central High School in Little Rock, Arkansas.  As someone who remembered the event as a child, and as President during the 40th Anniversary Commemoration, President Clinton holds a special connection to this history.

Speechwriters met with President Clinton to craft a message that would commemorate the sacrifice and courage of the Little Rock Nine and inspire those who heard the message to step out in similar acts of courage. The writers addressed the failures of a system of government that attempted to exclude individuals from the American Dream and resolved that America would only ever truly be great if everyone had equal access to opportunities. 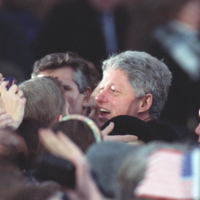 Public diplomacy is communicating directly with foreign citizens in order to influence popular opinion in other countries. This Digital Library Exhibit revisits President Clinton’s most visible act of public diplomacy on behalf of peace in Northern Ireland:  his excursion to celebrate the beginning of the Christmas holiday season in Belfast and Londonderry on November 30, 1995. Northern Irish musician and activist, Van Morrison, performed his Northern Ireland peace anthem "Days Like This" at the Belfast Christmas Tree Lighting in celebration of President Clinton's visit. 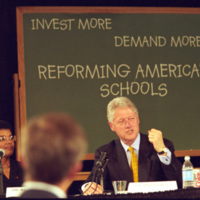 Improving education was a cornerstone of the Clinton Administration. President Clinton helped raise expectations for all students and invested in proven strategies to elevate educational performance. The Clinton Administration supported states in developing rigorous standards, systems of assessment, and accountability.  While President Clinton invested more in schools, he also demanded more from these schools. This led to remarkable progress in key areas such as implementing standards and accountability, improving student performance, closing the achievement gap, expanding access to technology, and making higher education more affordable. 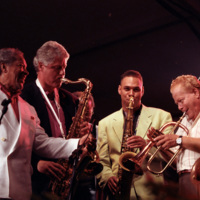 This exhibit contains photos and documents from the Clinton Digital Library highlighting some of the most popular musical artists of the 20th Century. Featured artists include Fleetwood Mac, U2, Aretha Franklin, Bruce Springsteen, and David Bowie. Growing up, President Clinton loved music, especially Rock and Roll of the '50's and '60's. As President, he once stated that "one of the nice things about being President was that nearly anyone would come perform for him." President Clinton delighted in meeting and getting to know the talented musicians of his generation.