Perhaps no other rock group is more associated with President Clinton than Fleetwood Mac. “Don’t Stop,” from the hugely successful album Rumours, became the official song of his 1992 presidential campaign. Popping up time and time again at that year’s Democratic National Convention, the hit single written by Christine McVie, vocalist and keyboard player for the band, became a fixture at all the events and appearances connected with the bid of the Arkansas Governor to capture the White House.

Having disbanded in the 1990s, Fleetwood Mac reunited at the insistence of Clinton in order to play “Don’t Stop” at his first inaugural ball. The song remained standard fare during the presidential races of 2000, 2004, 2008, 2012, and 2016 whenever he showed up to give speeches and so forth in support of Democratic candidates. Most famously, at the 2000 Democratic National Convention he concluded his remarks by declaring, “Keep putting people first. Keep building those bridges. And don’t stop thinking about tomorrow!” Upon conclusion of the final sentence, the song instantly began blaring over loudspeakers.

A British-American rock band, Fleetwood Mac was formed in 1967 in London. It originally played pretty much nothing but the blues. Led by guitarist Peter Green the group went to the top of the charts in the United Kingdom with the instrumental “Albatross,” released in 1968. Over a period of time Fleetwood Mac became more rock-oriented and experienced a rebirth with close to a complete makeover in personnel. Only the drummer Mick Fleetwood remained from the band at its inception. Eventually joined by McVie, her husband John, Stevie Nicks, and Lindsey Buckingham, he anchored the group during a period of unprecedented success that saw them selling millions of records and filling stadiums and arenas.

Fleetwood Mac experienced the peak of its acclaim in 1977 when Rumours established itself as one of those unique albums standing the test of time and continuing to fly off the shelves long after leaving the charts. In the end, Rumours wound up with sales of 40 million copies worldwide; that made it the eighth highest selling record in rock’n’roll history. Four hit singles—“Don’t Stop,” “Dreams,” “You Make Loving Fun,” and “Go Your Own Way”—landed in the U.S. Top 10 and could be seen as the soundtrack of a generation.

After re-forming in 1993 for President Clinton’s first inauguration, Fleetwood Mac has periodically toured and even released new records. Their most recent album, the EP Extended Play, came out in 2013 to rave reviews. Christine McVie, who left the band in 1998, came back on board in 2014 coinciding with a worldwide tour dubbed “On with the Show” that went on into the following year.

Inducted into the Rock and Roll Hall of Fame in 1998, Mick Fleetwood has been a member of one of rock’n’roll’s most successful and popular groups for 49 years. The author of two bestselling memoirs, Fleetwood: My Life and Adventures in Fleetwood Mac (1991) and Play on: Now, Then, and Fleetwood Mac: The Autobiography (2014), Fleetwood has survived and even thrived within a band known for its excesses and personal differences. 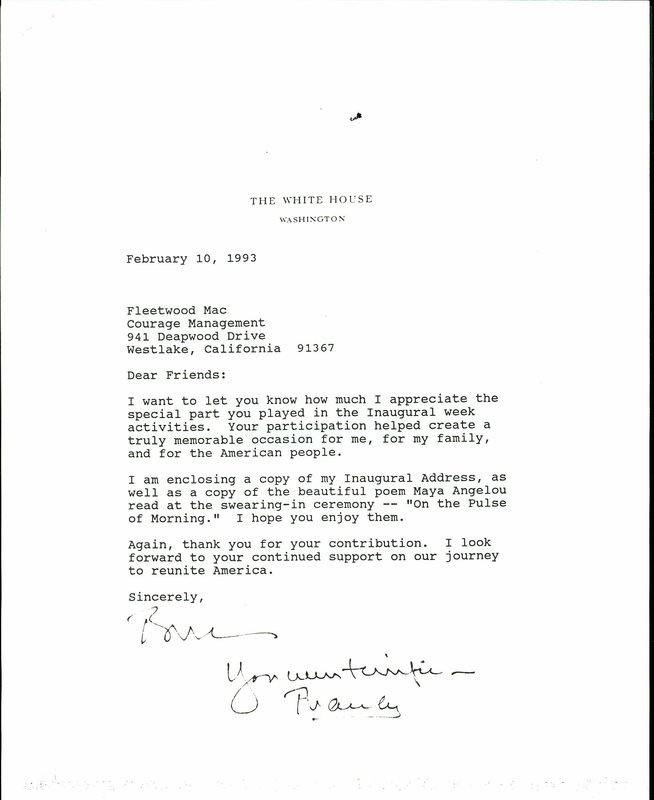 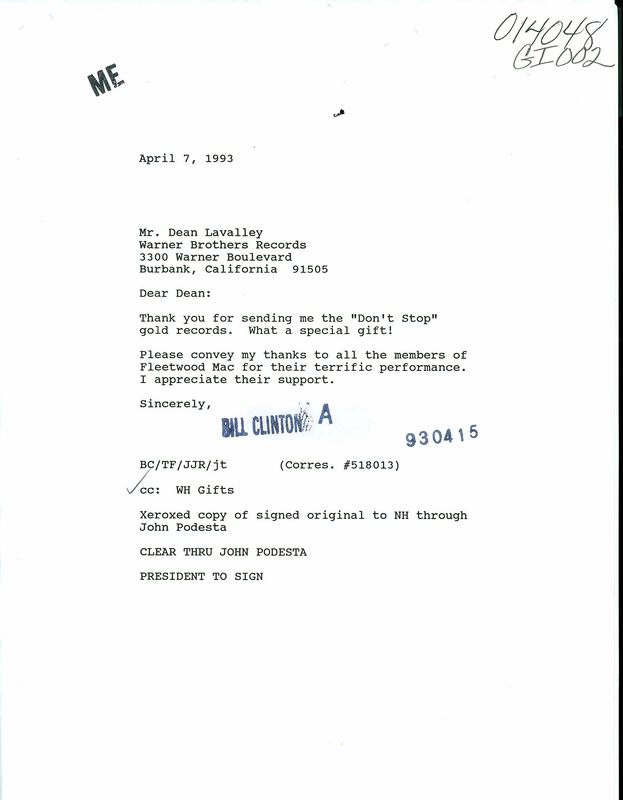 The two documents in question both originated in 1993. Authored by Bill Clinton, they convey a deep sense of appreciation to Fleetwood Mac for their handiwork and support. In the first letter, dated February 10th, the President thanks them for performing at his inauguration. He ends by giving kudos to the band for “your contribution. I look forward to your continued support on our journey to reunite America.” In the second letter, dated April 7th, the President expresses his amazement at the signed five gold records he received from Warner Brothers for “Don’t Stop.” The Chief Executive concludes by saying, “Please convey my thanks to all the members of Fleetwood Mac for their terrific performance.”