Helping bring peace to Northern Ireland was one of the most remarkable achievements of the Clinton Administration. When President Clinton assumed office in 1993, the conflict between the Protestant and Catholic communities in this province of the United Kingdom had claimed over three thousand lives. In 1998, aided in part by President Clinton's unceasing efforts, Protestant and Catholic political parties signed the Good Friday Agreement with the British and Irish governments. This ended thirty years of violent sectarian conflict.

While behind-the-scenes negotiations were critical to securing this legal settlement, most observers agree that President Clinton’s travels to Northern Ireland were crucial to the success of the peace process. During three trips to Northern Ireland with First Lady Hillary Rodham Clinton, the President spoke with residents on the streets and in the factories and city squares. They met with entrepreneurs and fruit shop owners, textile workers, housewives, and school children from both religious faiths. The First Couple also met with the victims of terrorism and their families.

Follow the footsteps of the President and the First Lady as they demonstrate the power of a single day to rekindle hope for the future. 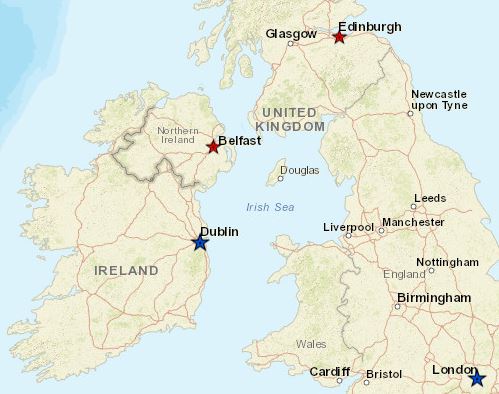 [Map courtesy of the Library of Congress. Originally published by the Central Intelligence Agency, 1987.]

The Decision to Get Involved →
Introduction