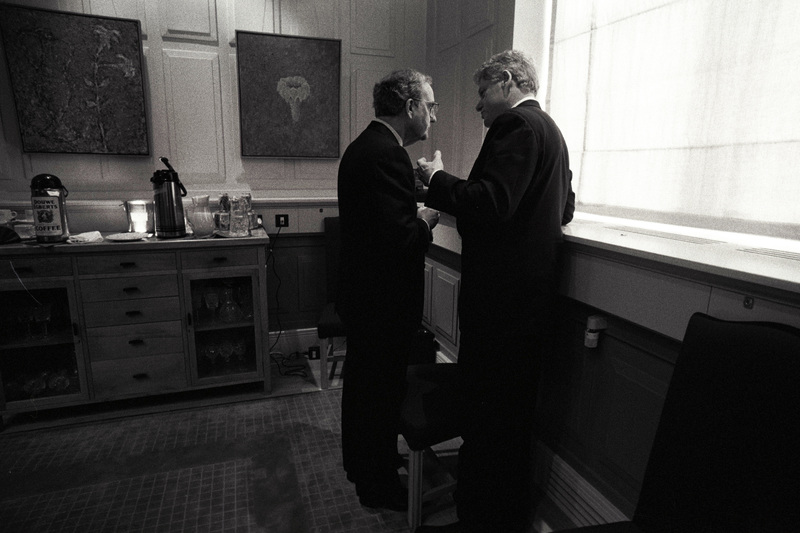 To help guide the complicated and ever-contentious peace talks, the President appointed outgoing Senate Majority Leader George Mitchell to serve as Special Adviser to the President & Secretary of State for Economic Initiatives in Ireland. American Attorney Jim Lyons, who served on the influential International Fund for Ireland, also helped to galvanize transatlantic business investment in Northern Ireland. Mr. Lyons would later succeed Mitchell as the President’s Special Adviser for Ireland.

Secretary of Commerce Ron Brown also served as an envoy, until a plane
crash in war-torn Croatia, where he was performing a similar role, ended his life on April 3, 1996. 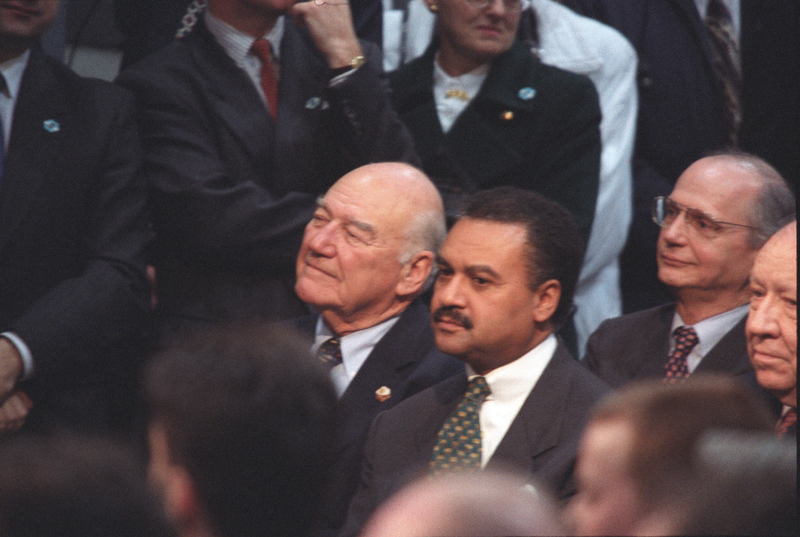 Secretary of Commerce Ron Brown, Secretary of Education Richard Riley and President Clinton's Stepfather Dick Kelley are seated next to each other at the Mackie Plant event in Belfast, Northern Ireland.

Less visibly, National Security Adviser Anthony Lake (1993 - 97) and National Security Council (NSC) staffer Nancy Soderberg (1993 - 97) served as the principal coordinators of sensitive and classified communications between the White House and the major political actors involved. Both traveled to Ireland and the United Kingdom in support of President Clinton’s historic trip to Northern Ireland in 1995.

After the success of the White House’s spring conference on economic investment in Northern Ireland, and with the previous year’s ceasefire still holding, President Clinton accepted the British government’s invitation to visit the United Kingdom and the Republic of Ireland in the autumn of 1995. This decision triggered one of the most diplomatically sensitive mobilizations for presidential foreign travel during the Clinton Administration. Hundreds of people working inside the governments of the United States, the United Kingdom, and the Republic of Ireland became involved. The trip also inspired dozens of proposals to schedule events and shape political messaging.

Although behind-the-scenes political discussions were a necessary component to the trip, the White House decided to emphasize a campaign-style itinerary of events that would maximize the President and First Lady’s public interactions with the Irish people. Their time would be focused on celebrating the early dividends from the ceasefire and channeling Christmas cheer into a spirit of optimism for the peace process.

The staff members of the White House Office of Scheduling and Advance have primary responsibility for organizing the travel arrangements of the President. Closely coordinating  with the White House Office of Communication, the National Security Council, the State Department, the Secret Service, members of Congress as well as foreign host counterparts, Scheduling and Advance sprang into action and produced a rich collection of archival records that bear witness to the scale and complexity of presidential travel abroad. 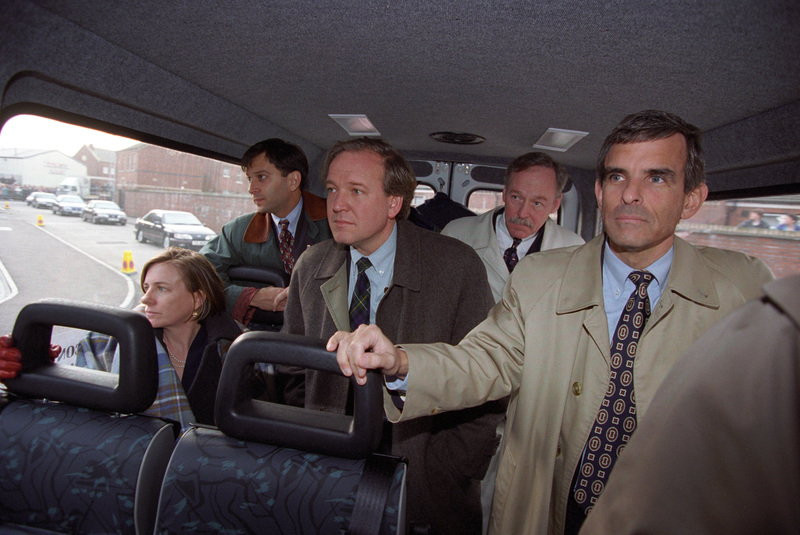 Nancy Soderberg, Mike McCurry, Bruce Lindsey and other Senior Staff  accompany the President to an event with business owners at the East Belfast Enterprise Park. 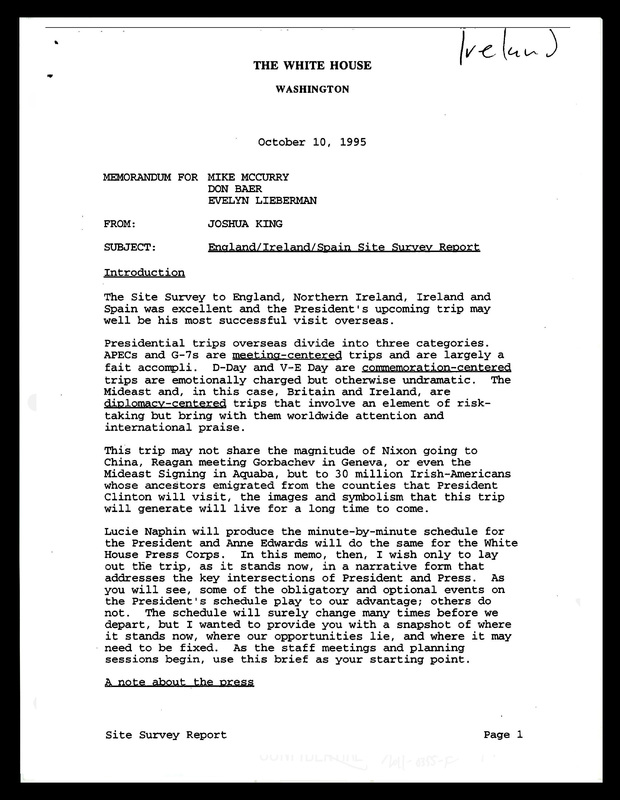 An important task of Scheduling & Advance is to prepare a “Site Survey Report.” Similar to film industry location scouting, the Site Survey Team travels ahead to locations to identify potential event sites and suggests scenarios for presidential speeches, meetings, and photo opportunities. White House staffer Joshua King ’s report for Northern Ireland identified potential themes for speechwriters, diplomats, and press handlers to maximize the impact of the President’s travel and minimize the possibility of creating controversy. 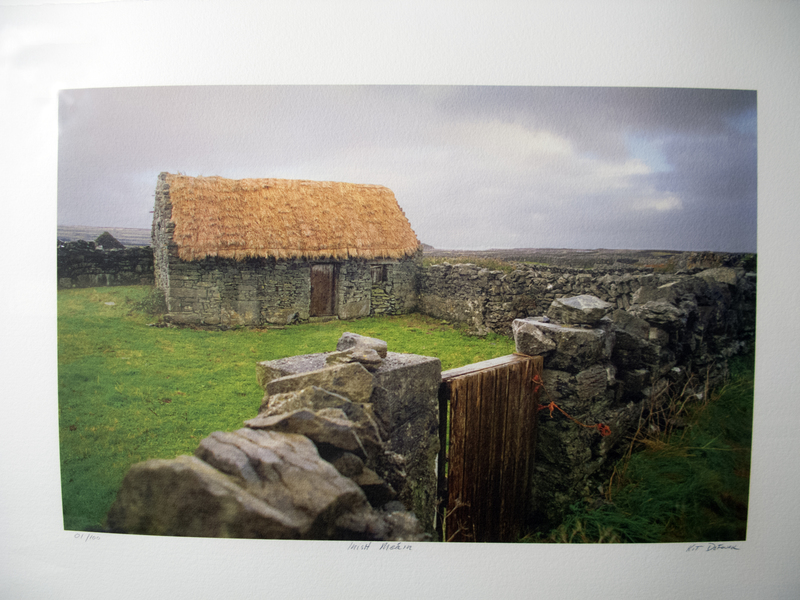 Does President Clinton have family roots in Northern Ireland? One site given serious consideration for inclusion in the President’s itinerary was a run-down cottage in rural County Fermanagh. President Clinton’s mother was born Virginia Dell Cassidy, and genealogists contributing to the trip planning effort believed the cottage might have once belonged to one of the President’s distant Cassidy ancestors. However, the lack of conclusive proof, and the remoteness of the farmstead, led the White House to cut the event from the schedule. 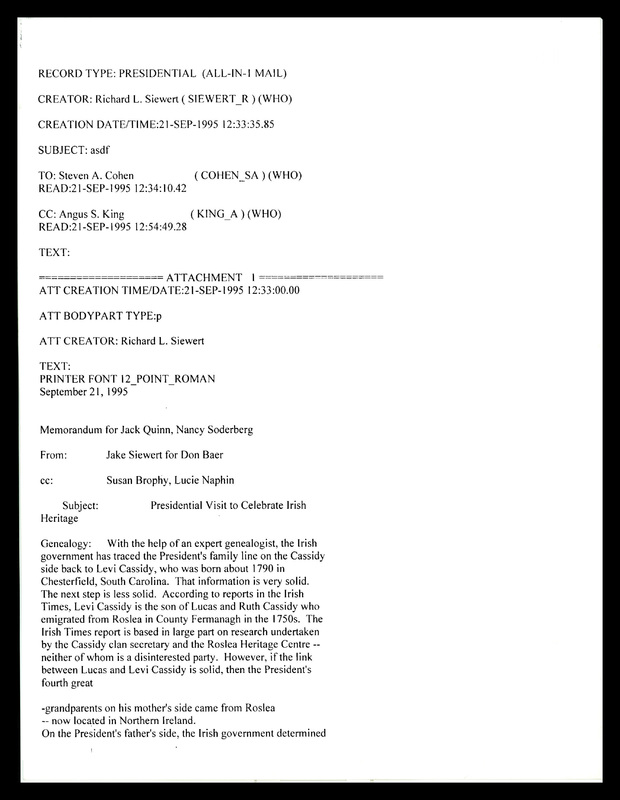 A collection released under the Freedom of Information Act, number 2016-0402-F tells the fascinating story of how White House staffers researched, debated, and ultimately dropped the idea of President Clinton visiting Fermanagh. 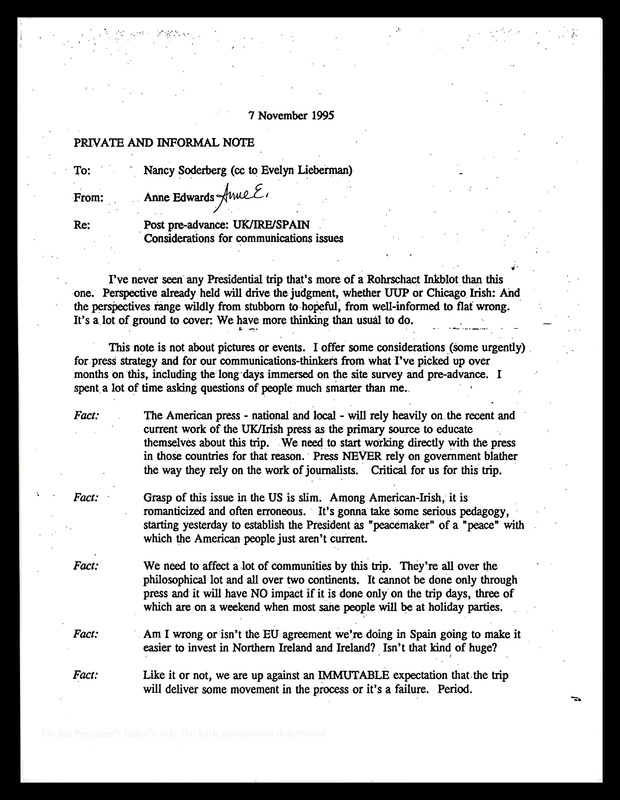 After sites were chosen, White House speechwriters began the lengthy process of preparing the President’s public remarks. Before delivery, each speech went through numerous revisions, including those of the President, who spent considerable time personally marking up drafts. The Office of White House Communications also prepared a press plan for the pool of journalists who would report on the speech. 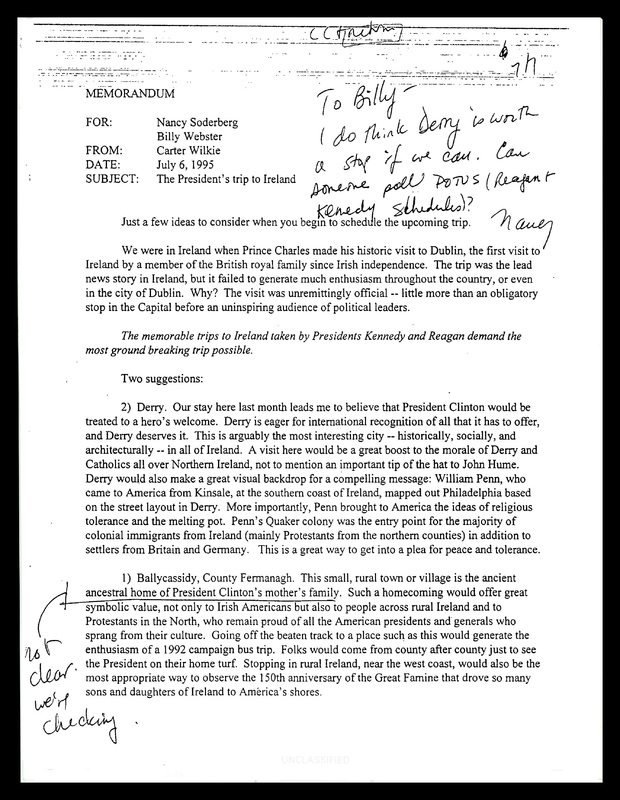 President Clinton and his team also received valuable advice from informal advisers and surrogates who often possessed unique access to certain political and business leaders involved in the peace talks. 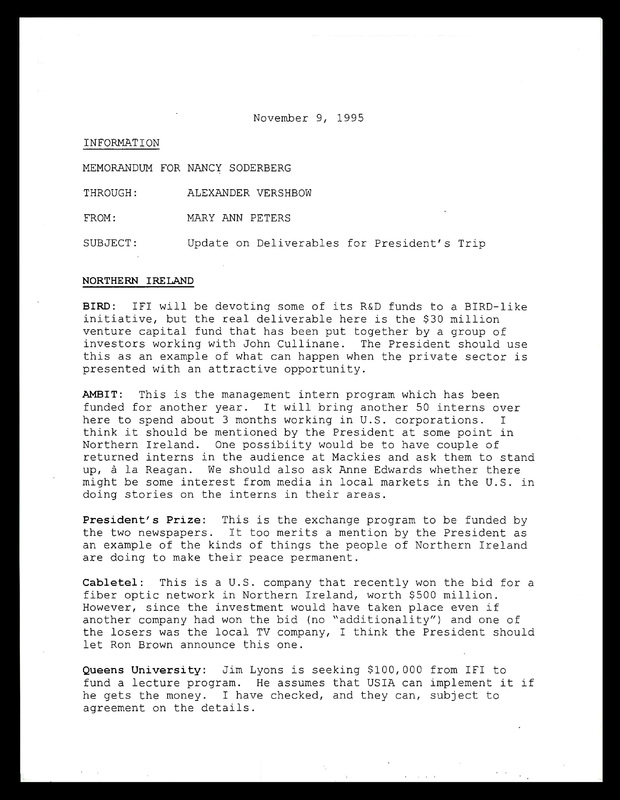 Another team of staff members prepared “deliverables” for the trip, a list of specific political, diplomatic, cultural, and economic agreements to be exchanged and signed during the President’s visit to a foreign country. The “deliverables” on this trip were strongly weighted towards American investments in Northern Ireland’s economy.

Other staff members compiled guest lists for all of the major events. Since a large delegation of U.S. Congressional leaders would also attend, this planning represented a delicate orchestration of foreign and domestic political considerations. 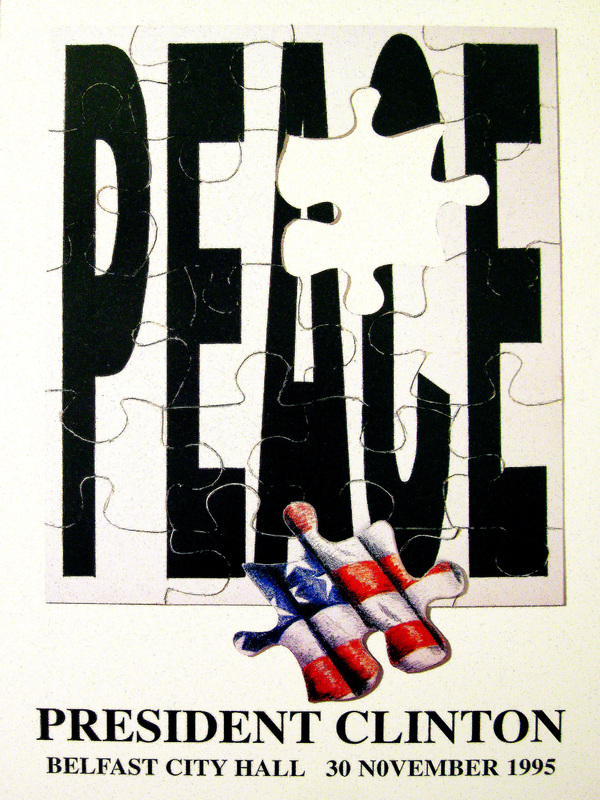 One of the last documents produced is the “Schedule of the President.” By the time Air Force One departed from the United States, virtually every moment of the President’s five-day trip had been planned. The result was an extraordinarily full itinerary of speeches, ceremonies, and other carefully prepared contacts with the people of Northern Ireland and their leaders.