“I come here with a sense of opportunity. But I also come here with a lot of anxiety. Everything will depend on what you and I agree to.” - President Boris Yeltsin during his one-on-one meeting with President Clinton, October 23, 1995 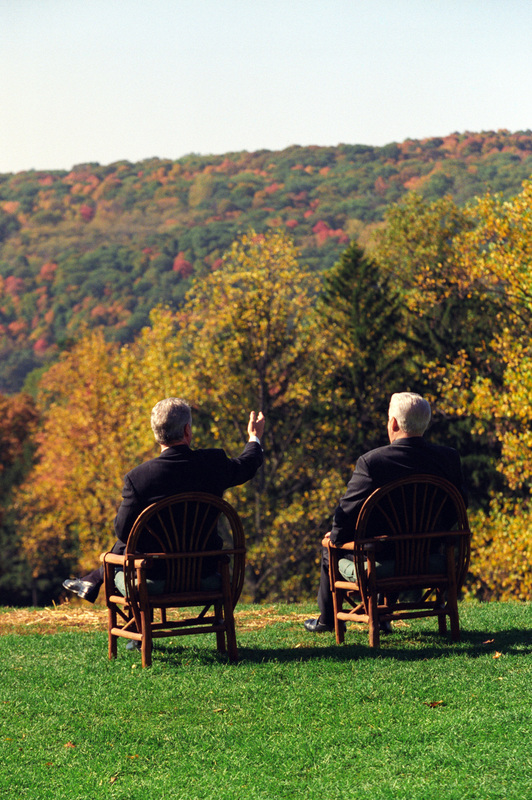 President Clinton and President Yeltsin admiring the view of the Hudson River Valley from the same chairs used by Roosevelt and Churchill during World War II.

President Clinton and President Yeltsin arrived on the lawn of the Roosevelt family home in separate helicopters on the morning of October 23, 1995. Both leaders had spent the previous day in New York City celebrating the 50th Anniversary of the United Nations. Both addressed the UN General Assembly that morning, and President Clinton hosted an evening reception with First Lady Hillary Rodham Clinton at the New York Public Library. President Clinton wrote the following about their arrival in Hyde Park:

"To put him more at ease, I flew him to Hyde Park in my helicopter so that he could see the beautiful foliage along the Hudson River on an unseasonably warm fall day. When we arrived, I took him out to the front yard of the old house with its sweeping view of the river, and we talked awhile, sitting in the same chairs Roosevelt and Churchill had used when the prime minister visited there during World War II." (My Life by Bill Clinton, pg. 675) 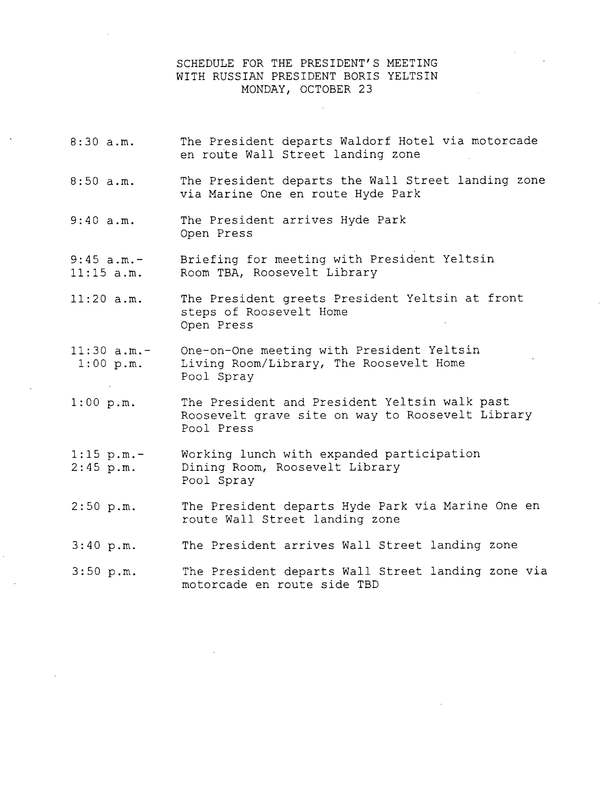 According to the President’s daily schedule, there were three hours of meetings on the agenda. Up first was a one-on-one meeting in the library of the Roosevelt historic home. Also present were two note-takers: Deputy Secretary of State Strobe Talbott and Yeltsin’s foreign policy advisor Dmitri Ryurikov. President Clinton opened the meeting with a challenge to “prove the newspaper pundits wrong. They want to write about a big blow-up. Let’s disappoint them.” Clinton and Yeltsin both spent the first part of the meeting reassuring each other about their commitment to a strong U.S.-Russia relationship. Yeltsin stated that “somehow in the past two months, we’ve gotten off track. It’s not a problem between the two of us personally. There are no personal grudges between us, no personal mistrust. But our countries, our governments have started to work on opposite sides of too many issues. We’ve been pulling against each other rather than pulling together. Somehow we have to restore our personal rapport as the driving force in the relationship.” Both leaders agreed on the importance of communication and on the need to project a “sense of stability in the U.S.-Russian relationship.” 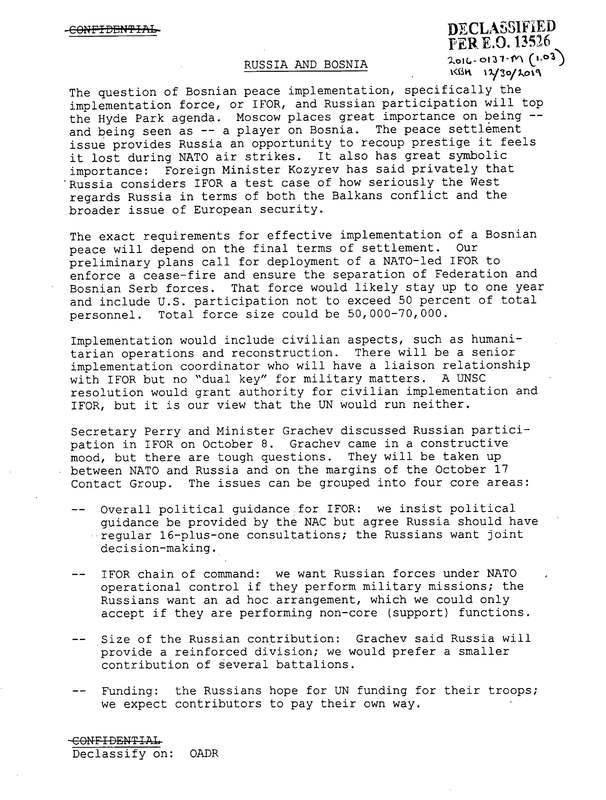 The top item on Clinton’s agenda for Hyde Park was Bosnia, specifically Russia’s participation in the peace implementation force. Clinton’s background paper on the subject states that “Moscow places great importance on being -- and being seen as -- a player on Bosnia” and that “the peace settlement issue provides Russia an opportunity to recoup prestige it feels it lost during NATO air strikes.” Yeltsin’s statement that “You decided to bomb Serbs. You did not consult with Yeltsin -- that’s not good.” summed up his feelings on the air strikes. The U.S. wanted NATO in the lead, but Russia was unwilling to place its troops under NATO command. Clinton and Yeltsin agreed to a compromise: Russian troops would perform non-combat roles (heavy airlift, reconstruction, mine-clearing), thus removing them from NATO command. Yeltsin’s only demand was that the Russian contribution be labeled “crucial” or “special”, not “auxiliary” or “secondary.” 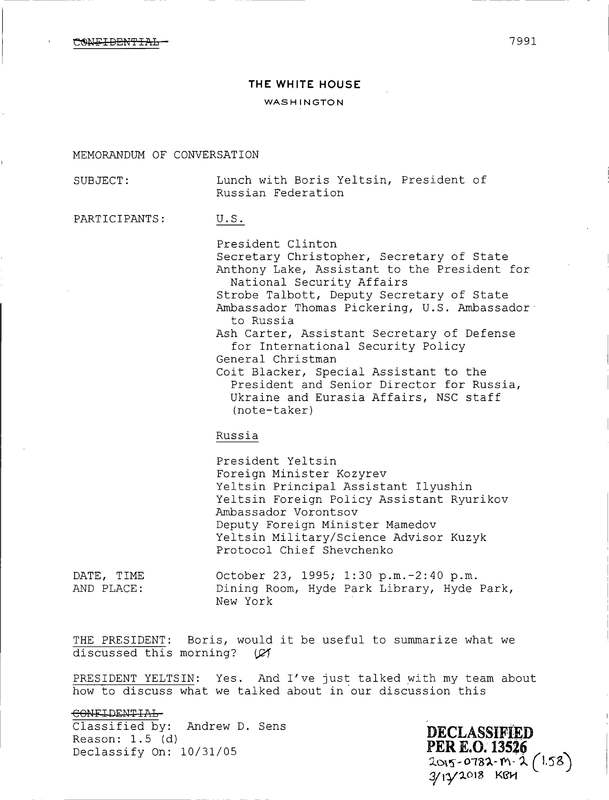 Following their one-on-one meeting, Clinton and Yeltsin were joined by their delegations for a luncheon meeting in the green and gold White House dining room at the Roosevelt Presidential Library. The earlier meeting was summarized for the group, but not much else was accomplished. Yeltsin’s Deputy Foreign Minister, Georgiy Mamedov, tried to discuss the Conventional Armed Forces in Europe (CFE) Treaty, but Yelstin cut him off saying “No, no. We will talk about CFE after we eat! Otherwise we will miss this excellent American cuisine.” According to Strobe Talbot, who was present at the luncheon, Yeltsin enjoyed multiple glasses of wine with his lunch and  “conducting serious business of any kind...turned out to be difficult for the usual reason.” (The Russia Hand by Strobe Talbott, pg. 182) 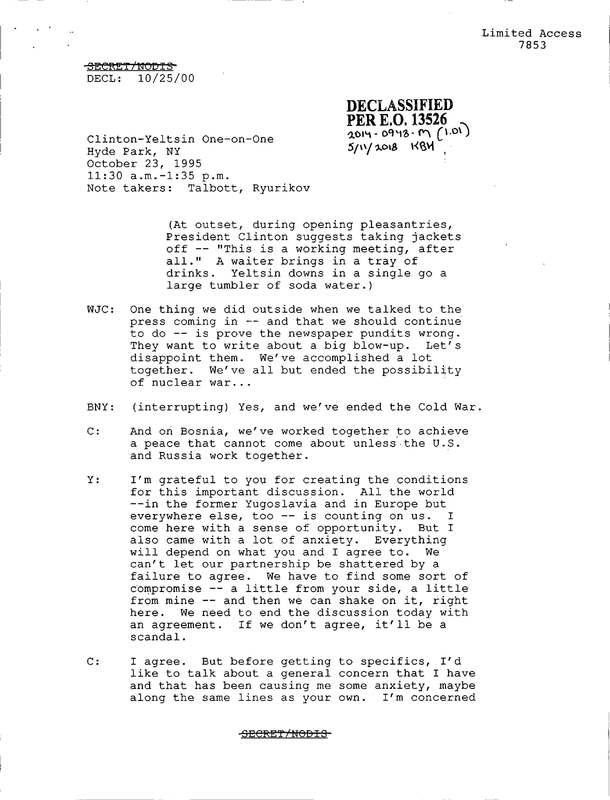 Clinton and Yeltsin reconvened after lunch for an unscheduled one-on-one meeting, where CFE was finally discussed. The Conventional Armed Forces in Europe Treaty was negotiated during the final years of the Cold War and set limits on certain types of military equipment. The limits took effect on November 17, 1995 (less than a month after the Hyde Park meeting). Russia argued that it needed more equipment in “CFE’s flank zone ... in order to deal with instability in the North Caucasus region.” Clinton pressed Yeltsin on the issue, “You asked me to get you a fix to the map; I’ve done so. With America leading the way, NATO put together a proposal that meets your basic needs. It wasn’t easy to work this through the Alliance, but we did. Now we’re waiting for your reply.” Yelstin conceded. Clinton accomplished his two main objectives for the meeting: Russia’s military role in Bosnia and CFE.