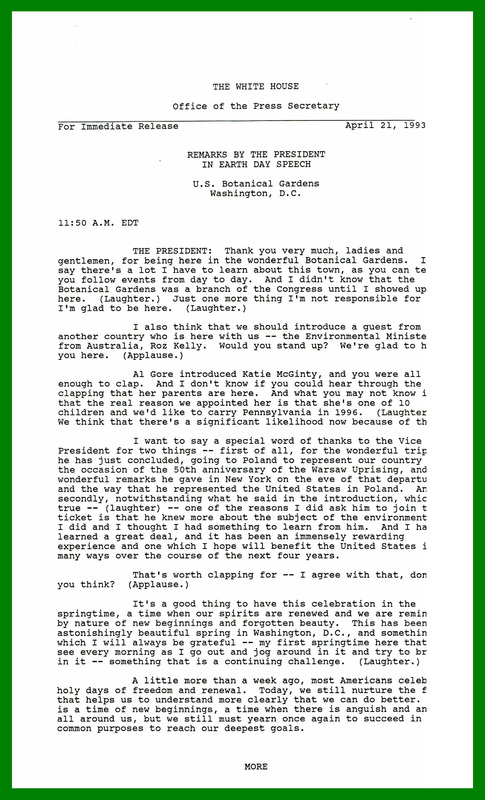 Ninety-two days into his first term, President Clinton gave an Earth Day address that would set the bar for his administration’s environmental policies. The President asserted that we should not waste time when it comes to protecting our environment. Everyone, from the Executive Office to the State level, big businesses to small communities, has a responsibility to our planet. For the next eight years, the Clinton administration followed through on this message, taking a stand for our air quality, water sources, wilderness, and natural resources.

If there is one commitment that defines our people, it is our devotion to the rich and expansive land we have inherited. From the first Americans to the present day, our people have lived in awe of the power, the majesty, and the beauty of the forest, the rivers, and the streams of America. That love of the land... flows like a mighty current through this land and through our character. President Clinton, Remarks on Earth Day, April 21, 1993

Ten years after that Earth Day speech, President Clinton remained constant in his commitment to our planet. It was important to him that his presidential library was as sustainable and as friendly to the environment as it could be. In 2004, the U.S. Green Building Council awarded the presidential library the Silver level in LEED certification for new construction, and in 2009, the Library was upgraded to the highest rating possible, Platinum.

Commitment to Protecting the Environment →
Introduction