I am very pleased that the United States has reached a truly historic agreement with other nations of the world to take unprecedented steps to address the global problem of climate change. The agreement is environmentally strong and economically sound. It reflects a commitment by our generation to act in the interests of future generations. President Clinton, Remarks on the Kyoto Protocol on Climate Change and an Exchange With Reporters in New York City, December 10, 1997

Under President Clinton’s leadership, the United States championed market-based approaches to reducing carbon pollution. This built on the successful efforts in the United States to reduce lead in gasoline and combat acid rain through market-based policies, which laid the foundation for Europe, China, California, and states in the northeastern U.S. to adopt pollution markets to reduce their carbon dioxide emissions. 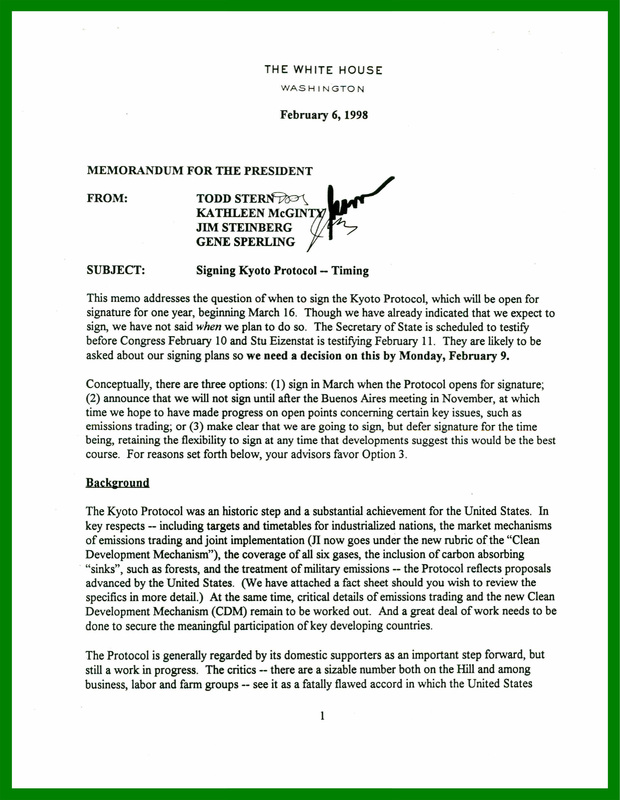 In 1997, with critical leadership from Vice President Gore, representatives of more than 160 nations agreed on the basic architecture of an international strategy to combat global warming. This agreement, called the Kyoto Protocol, set targets for reducing greenhouse gas emissions from industrialized countries, while also creating those market-based mechanisms introduced by the United States.

The US signed the document in 1998, but Congress failed to ratify the agreement, which meant the US never officially signed on to the pact. Despite its shortcomings, the Kyoto Protocol did lay the groundwork for the Paris Agreement, which many find to be more inclusive and potentially more effective.

← Protecting Wilderness Lands
One That Got Away →
Signing the Kyoto Protocol