Beginnings of the International Space Station

In 1984, President Ronald Reagan announced the idea for space station Freedom in his State of the Union Address. The space station was designed to be a valuable resource, a site where equipment needed to be carried into space only once and could be used again and again by visiting astronauts and cosmonauts while also enabling scientists on Earth to analyze experimental results and modify follow-up investigations much more quickly than before. Freedom was intended to be a permanently manned Earth-orbiting station, but the project was stalled due to budget constraints. Freedom remained in limbo until April 1993, when President Clinton requested that NASA redesign Freedom and create more cost-effective alternatives from which he could choose, as Congress and the administration endeavored to reduce NASA’s budget. In June of 1993, President Clinton approved NASA’s proposal to keep much of Freedom’s design but add an existing spacecraft bus as an initial building block with the option to add more to the design over time. Congress approved the proposal and NASA began work on the International Space Station (ISS). Click here to learn more about the design plan President Clinton approved. 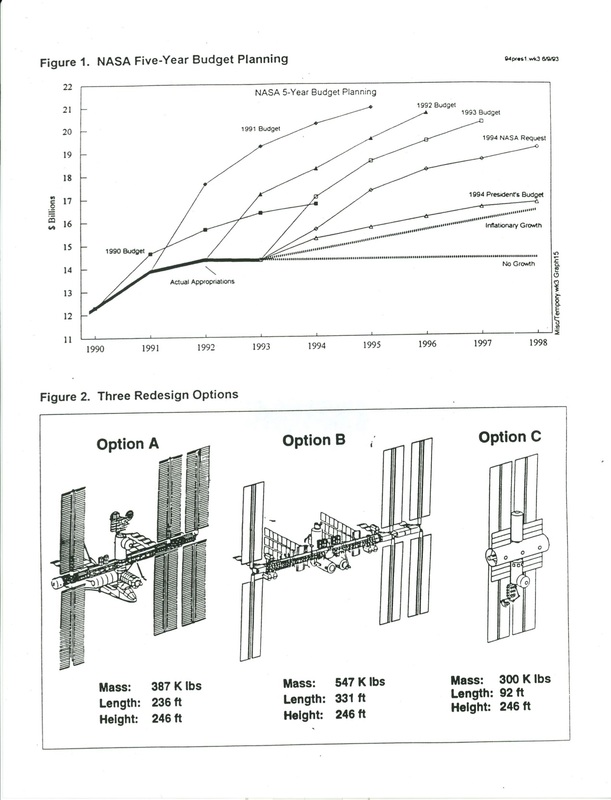 The three design plans proposed by NASA in 1993.

The administration used the International Space Station as a tool of foreign diplomacy by forming a 14-nation partnership consisting of: Belgium, Canada, Denmark, France, Germany, Italy, Japan, Netherlands, Norway, Spain, Sweden, Switzerland, the United Kingdom, and the United States. This international project provided scientists from all over the world an opportunity to conduct research in space regardless of their own country’s space infrastructure. These partnerships also lessened the United States’ financial burden of researching and constructing the ISS.

President Clinton delivering remarks via telephone to the crew of the space shuttle Endeavour, June 22, 1993.