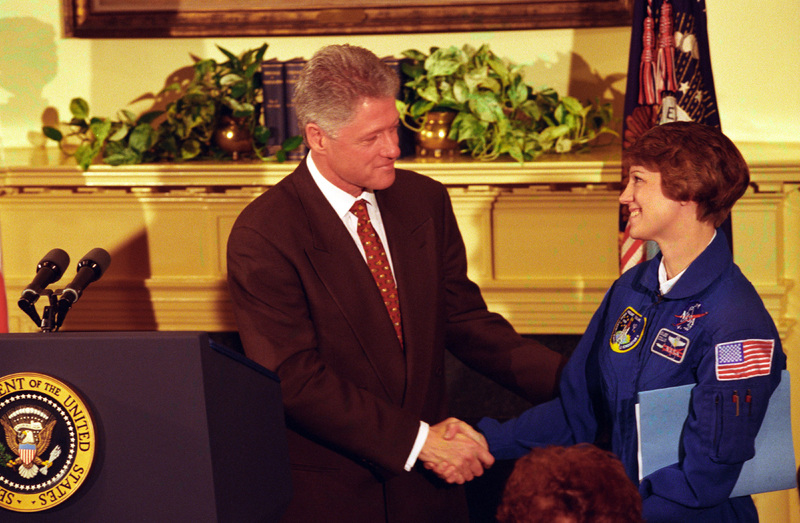 Colonel Eileen Collins shaking hands with President Clinton in the Roosevelt Room following the announcement of Collins as the first female space commander on March 5, 1998.

“And perhaps with her well-justified new fame, notoriety, the greatest mark Colonel Collins will make will not just be written in the stars, but here on Earth -- in the mind of every young girl with a knack for numbers, a gift for science, and a fearless spirit. Let us work to make sure that for every girl and every boy, dreams and ambitions can be realized and even the sky is no longer the limit.” 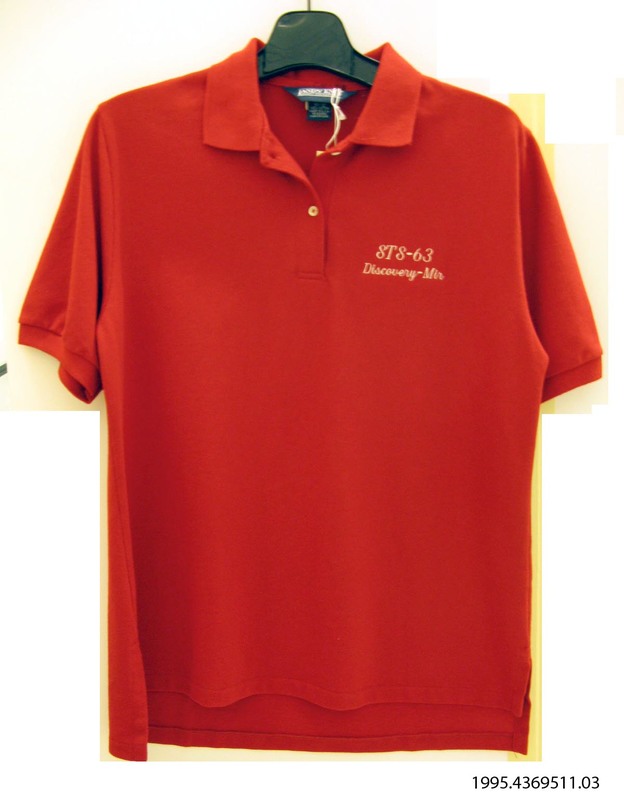 STS-63/Discovery-Mir Shirt worn by Eileen Collins on the space shuttle given to First Lady Hillary Rodham Clinton at the White House.

Colonel Eileen Collins was selected by NASA to be an astronaut in 1990 and successfully completed training in 1991. After participating in two space flights, Colonel Collins was chosen in 1995 to become the first female space shuttle pilot. Collins piloted mission STS-63, which involved a rendezvous between Discovery and the Russian space station Mir. STS-63 launched on February 3, 1995 and returned on February 11, 1995. 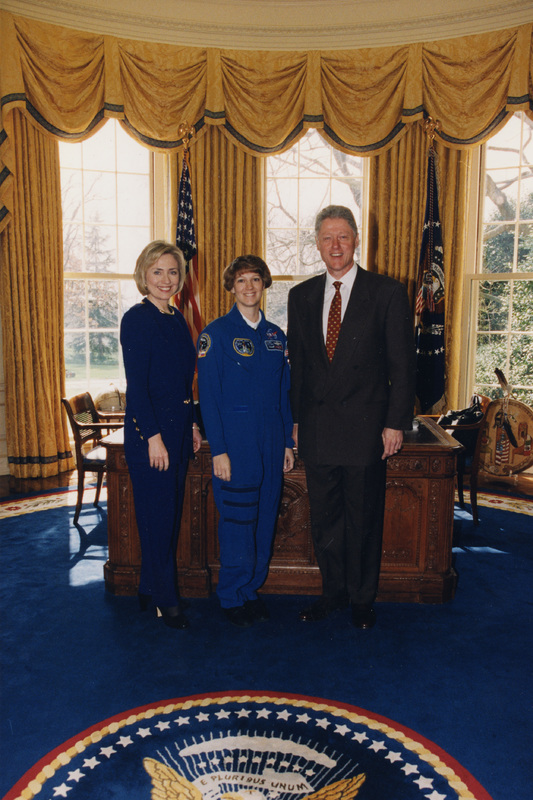 On March 3, 1998, it was announced that Colonel Collins would make history again by becoming the first female shuttle commander. The announcement was the centerpiece of a week-long effort by the Clinton administration to highlight achievements in science and math and coincided with the beginning of National Women's History Month. First Lady Hillary Rodham Clinton delivered the landmark announcement and christened Collins’ achievement "one big step for women and one giant leap for humanity,” a reference to Neil Armstrong’s famous first words on the moon.

The mission that Collins commanded (STS-93, July 1999) launched the most advanced X-ray telescope ever flown, allowing scientists to examine some of the astral bodies most distant from Earth. 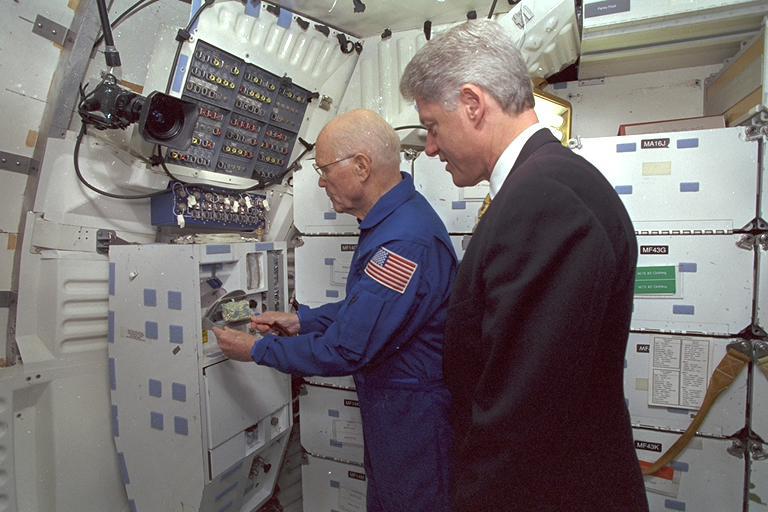 “And this October, a true American hero, a veteran pilot of 149 combat missions and one 5- hour space flight that changed the world, will return to the heavens. Godspeed, John Glenn. John, you will carry with you America's hopes. And on your uniform, once again, you will carry America's flag, marking the unbroken connection between the deeds of America's past and the daring of America's future.” 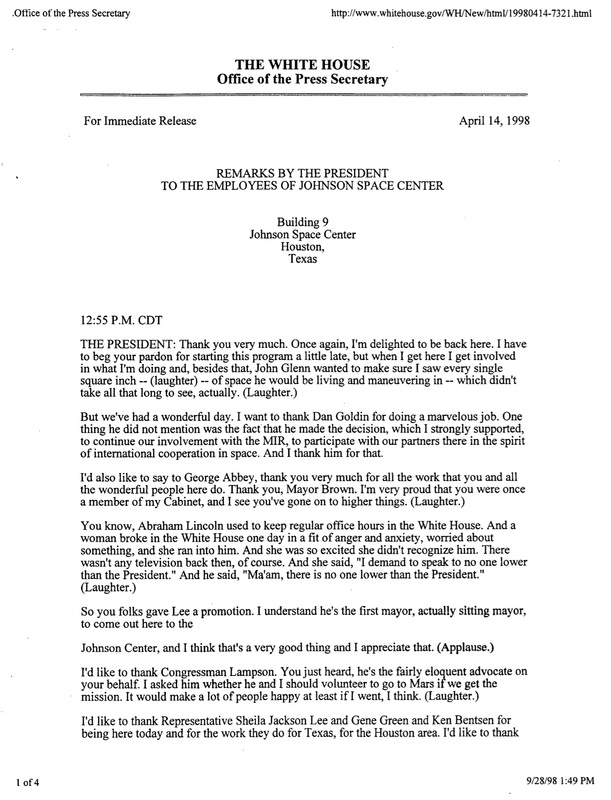 In 1996, at 75 years old, former astronaut and then-Senator from Ohio John Glenn began lobbying NASA to allow him to go back into space for the agency to conduct geriatric studies. His request was granted, and at 77 years old, Glenn became the oldest person ever to travel in space. He returned to space in October 1998 aboard the Space Shuttle Discovery during mission STS-95 and participated in experiments to study the connections between space flight and aging during his 1998 Shuttle flight. 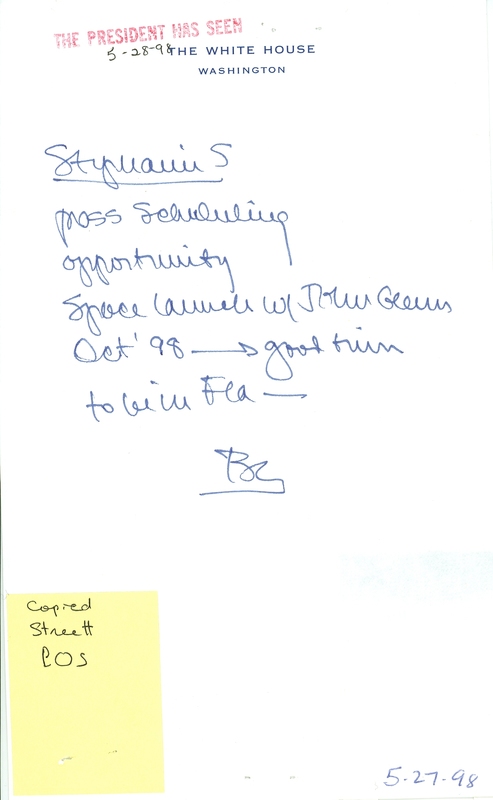 Clinton personally requested to attend Glenn’s space launch, as indicated in a note written by the President to Stephanie Streett, assistant to the president and director of scheduling. On October 29, 1998, when NASA launched the STS-93 mission and sent Glenn back into orbit, President Clinton and First Lady Hillary Rodham Clinton were on the ground at the Launch Control Center to witness history. The president simultaneously made history of his own, as this became the first shuttle launch ever personally witnessed by an American president.

The flight aboard the shuttle lasted nine days and orbited the Earth 134 times, traveling 3.6 million miles in 213 hours and 44 minutes. The mission's objectives involved investigating life-sciences experiments, using the SpaceHab module to perform these experiments on Senator Glenn. 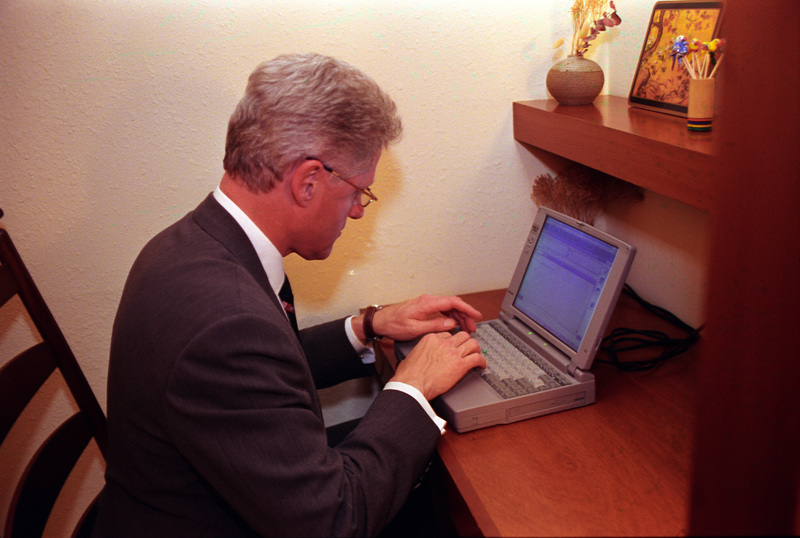 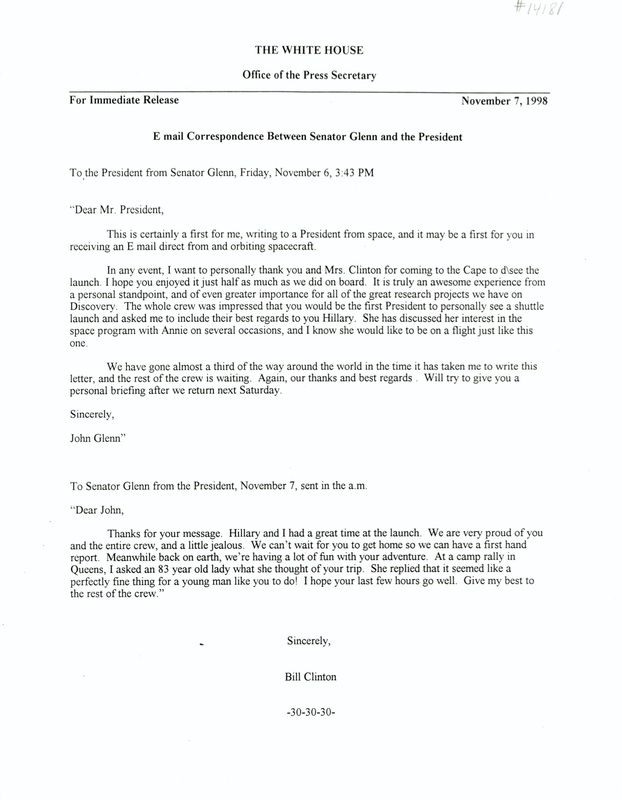 President Clinton and Senator Glenn further made history on November 7, 1998, when Glenn emailed President Clinton from the shuttle. The email was received by Clinton while visiting friends in Arkansas and necessitated Clinton borrowing a laptop from White House physician, Commander Robert Darling. Clinton’s reply back was the first presidential email sent to space.