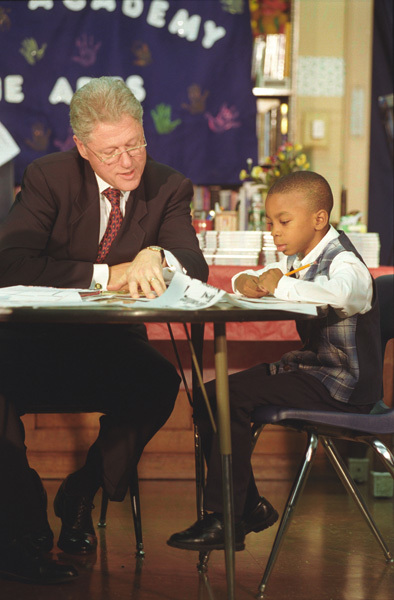 Students should review the Education Reform exhibit before completing any of the following assignments. Students may work in groups or individually.

As part of President Clinton’s efforts to reform education, schools that made significant academic progress were awarded the designation of a National Blue Ribbon (NBR) school. For this activity, students should research the eligibility criteria for a school to be awarded a NBR before considering if their school would qualify for the award. If the school qualifies, why does it? If not, what things would need to be improved upon? Students should compile their findings and present them to the class in the medium of their choice.

Extension Activity/Informed Action Component:
Students will consider ways in which their school could “close the gap” with the NBR requirements. Working in groups, students should prepare a proposal in the medium of their choice. Once completed, the proposal can be presented to a school open house, where students can share their proposals with other classes/grades, parents, and members of the general public.

While serving as Arkansas’ Governor and as the President of the United States, Bill Clinton made educational reform a top priority. In this activity, students should begin by exploring the reforms Governor Clinton championed in Arkansas on the “Achievements in Arkansas Education Reform” page before looking at President Clinton’s work at the national level on the “GOALS 2000” page. After considering the accomplishments, students should brainstorm possible changes to current educational policies and create a list of reforms that they believe need to be addressed.

Extension Activity/Informed Action Component:
Students should expand upon their list by formatting it as a piece of legislation. Once completed, students should submit their “bills” to their State Representative to propose changes to their state education system.