For many, the most significant domestic terrorist attack was the bombing of the Alfred P. Murrah Federal Building in Oklahoma City, Oklahoma. On the morning of April 19, 1995, former Army soldier and security guard Timothy McVeigh parked a Ryder truck with a homemade bomb in front of the building.  McVeigh and his accomplice, former soldier Terry Nichols, had been radicalized by anti-government ideology. At 9:02 am, the bomb exploded.  It destroyed a third of the structure and damaged up to 300 nearby buildings. A total of 168 people, including 19 children in the on-site daycare center, died in what remains the worst act of domestic terrorism in American history.  In 1997, a jury convicted McVeigh and sentenced him to death. He died by lethal injection in 2001.  Nichols was found guilty on conspiracy and manslaughter charges. In 2004, the state of Oklahoma convicted him on first degree murder charges and sentenced him to life in prison. A third individual, Michael Fortier, had known of the plan and failed to warn authorities. In exchange for his testimony, he was sentenced to 12 years in prison. The following collections contain records on the Oklahoma City bombing:

2006-0326-F This collection consists of correspondence between President Clinton and family members of the bomb victims, proclamations, a FEMA briefing book, memoranda, speeches, and schedules. Records of note include background material pertaining to militias and extremists, an outline of Presidential actions against crime and terrorism, and a survey attempting to define the perception Americans have of government security measures.

2006-1164-F Segment 2 This is the second segment of a collection consisting of records dealing with terrorist attacks during the Clinton Administration and the counterterrorism policies put in place in response to those attacks. The collection contains records from the files of the staff of the Transnational Threats Directorate in the National Security Council and includes memoranda, briefing papers, reports, notes, cables, emails, correspondence, and press material. Topics addressed include legislation, preparedness reports, aviation security, Presidential Decision Directives (PDDS) 39 and 62, and the investigations of the Oklahoma City bombing, the Riyadh bombing, the Khobar Towers bombing, the U.S.S. Cole bombing, and abductions of westerners. 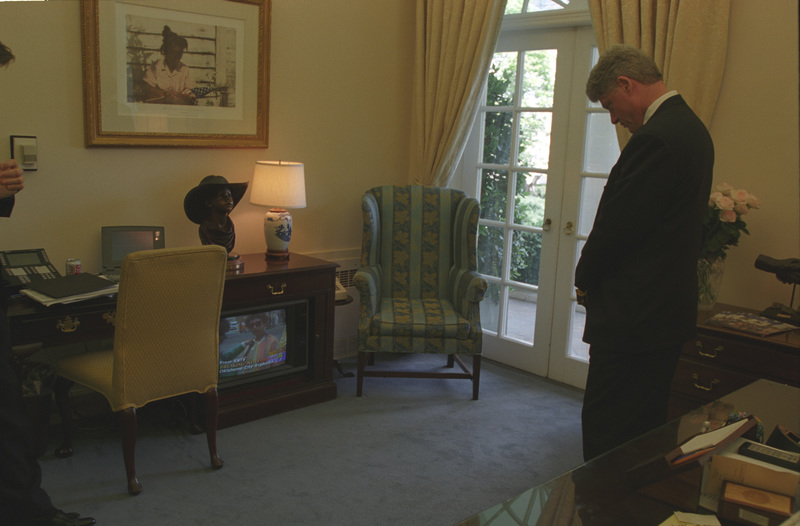 2011-0463-F This collection consists of video recordings of President Clinton and Hillary Rodham Clinton greeting officials and being briefed by local law enforcement, emergency rescue personnel, and firemen at the State Fairgrounds Arena holding area in Oklahoma City, OK on April 23, 1995. The video recording also contains footage of the Clintons greeting and speaking to families of United States Secret Service officers who perished during the bombing.