Another domestic terrorism incident shocked the nation just a year after the Oklahoma City Bombing. In July 1996, the United States was hosting the Olympic games in Atlanta, Georgia. On July 27, while people were gathered in Centennial Olympic Park, a 911 call came in threatening to bomb the park. Security Guard Richard Jewell located the backpack containing the pipe bomb, alerted the Georgia Bureau of Investigation, and began an evacuation prior to the explosion at 1:20 am. Thanks to his quick thinking, only one person, Alice Hawthorne, was killed in the blast.  A photojournalist, Melih Unzunyol, experienced a heart attack and also died. 111 people were injured. Despite his heroic actions, the FBI originally considered Jewell a suspect. Eventually, after the bombings of a gay nightclub and abortion clinic in Atlanta, the police arrested Eric Rudolph.  He was sentenced to multiple life sentences in 2005. Records on the incident are located in the following collections: 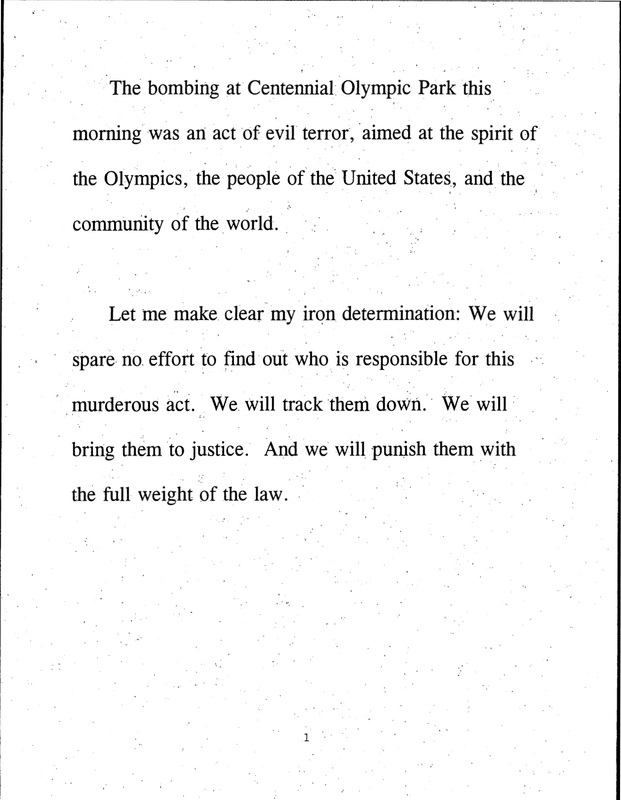 2006-0327-F This collection consists of materials related to the Centennial Olympic Park bombing that occurred on July 27, 1996 in Atlanta, Georgia. It includes correspondence, memoranda, reports, speech drafts, and email related to reactions and the aftermath of the bombing.

2006-1164-F Segment 1 This collection consists of records dealing with terrorist attacks during the Clinton Administration and the counterterrorism policies put in place in response to those attacks. These records include press briefings following the attack on the USS Cole and memos regarding security during the 1996 Olympic Games in Atlanta. Records dealing with aviation security include the final report to the President from the White House Commission on Aviation Safety and Security dated February 12, 1997, a list of accomplishments, and press guidance on increased security measures dated August 1995.

2006-1164-F Segment 3 This is the third segment of a collection consisting of records dealing with terrorist attacks during the Clinton Administration and the counterterrorism policies put in place in response to those attacks. These records contain studies, legislative materials, memoranda, and reports regarding United States government preparedness for terrorist attacks, and response to those attacks. The documents address a wide variety of terrorism-related topics, including aviation security, Presidential Decision Directives 39 and 62, the 1986 La Belle Disco bombing, the 1988 Pan Am 103 bombing, the 1996 Khobar Towers Bombing, the TWA 800 disaster in 1996, the 1999 Egypt Air 990 crash, and the 1996 Summer Olympics.